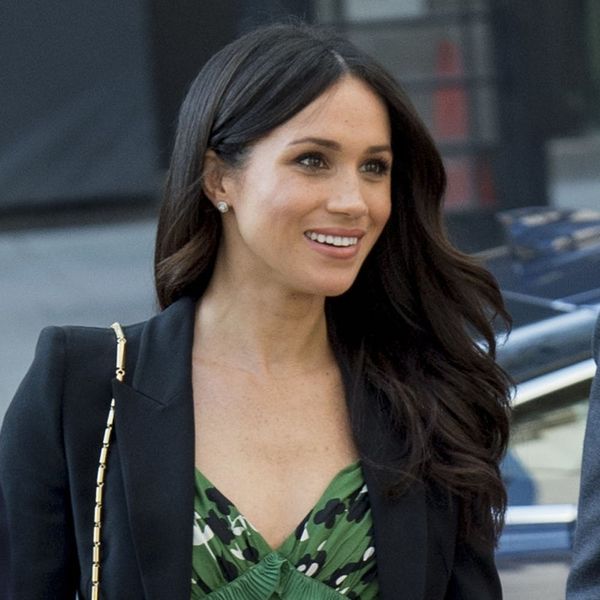 The royal wedding is almost here! Speculation about Meghan Markle's wedding dress is running rampant, and we can be certain that no matter which designer she goes with, the much-anticipated gown will be absolutely gorgeous. However, we do have some suggestions, should she choose to take 'em. Scroll through to see 15 incredible designer gowns we'd love to see Markle marry Prince Harry in.
Monique Lhuillier: The Alexia gown from Monique Lhuillier's S/S 2017 collection is a gorgeous, non-traditional toffee hue with lace appliqué flowers all over. Since we know Markle is already quite the unconventional royal bride, she would slay in this. (Photo via Thomas Concordia/Getty)
Theia: The bell sleeve detail on this Theia gown from their Spring 2019 collection is both trendy and classic. The slim silhouette and subtle plunge neckline would be incredibly flattering on Markle's frame. (Photo via JP Yim/Getty)
Monique Lhuillier: There are definitely similarities between this Monique Lhuillier F/W 2016 gown and Kate Middleton's iconic Alexander McQueen number designed by Sarah Burton, namely the long lace sleeves and the lace overlay on the bodice. But this style brings in an added California ease that is unmistakably Markle. (Photo via Randy Brooke/Getty)
Viktor & Rolf: For a trendsetting royal-to-be, actress, and activist this simple short-sleeved ballgown from Viktor and Rolf Mariage S/S 2018 collection is spot-on. It's modest yet contemporary and will never look dated! (Photo via Edward James/Getty)
Pronovias: In case Markle isn't the ballgown type, this stunning, figure-hugging mermaid dress by Pronovias for Barcelona Bridal Week 2018 is also a worthy number. While it's covered up enough for a traditional royal wedding, it's also slightly risqué with the lace insets on the sides. (Photo via Estrop/Getty)
Naeem Khan: The Indian-American designer is famous for creating couture bridal dresses that look straight out of a dream. And it's OUR dream to see Harry's bride step out in this intricate, lacy floor-length gown from Khan's S/S 2019 collection. (Photo via Thomas Concordia/Getty Images)
Sachin & Babi: Everyone loves an off-the-shoulder look, and this one from Sachin & Babi's S/S bridal 2018 show is the perfect marriage of romance and runway for Markle and Prince Harry's May nuptials. (Photo via JP Yim/Getty)
Theia: The beaded illusion bodice, the silk skirt, the tiara! This breathtaking ensemble from Theia's Spring 2019 collection would surely wow the attendees and television audiences alike. (Photo via JP Yim/Getty)
Ines Di Santo: While intricate lace and delicate beading are synonymous with bridal, we can also see the 36-year-old going with a more understated, modern look. This Ines Di Santo option from S/S 2016 with a sloping V-neckline would be a knockout on the former Suits star. (Photo via Albert Urso/Getty)
Reem Acra: With a fitted bodice, defined bust, and ivory color, we can see this Spring 2018 Reem Acra gown going down in the fashion books as one of the most epic royal wedding gowns of all time. (Photo via Jordi Vidal/Getty)
Christian Siriano: While it's likely that Markle will opt for a British designer for her big day, there's always the chance that she might pay homage to her roots and pick an American designer. If so, might we recommend red carpet-favorite Christian Siriano? We're digging this lace-sleeve sheath dress from his S/S 2017 bridal collection. (Photo via JP Yim/Getty Images)
Rosa Clara:A This snowy-white lace gown by Spanish designer Rosa Clara for Spring 2018 is a castle-ready choice that doesn't compete with the grand location. (Photo via Estrop/Getty)
Berta: A rising trend in bridal fashion is eschewing the veil in favor of a flowing cape. We can totally see the 36-year-old walking down the aisle with a trailing, cathedral-length cape, like this one from Berta's Spring 2019 range. (Photo via Randy Brooke/Getty)
Oscar de la Renta: We're sure Markle agrees that bridal gowns are better when they have pockets. This adorable Oscar de la Renta S/S 2016 cap-sleeved frock didn't skip that all-important detail. (Photo via Slaven Vlasic/Getty)
Ralph & Russo: We're adding Ralph & Russo to this list not only because the Australian-British design duo created Markle's black engagement look, but because their designs are OUT. OF. THIS. WORLD. Case in point, their finale dress from their F/W 2016 show. Amazing. (Photo via Richard Bord/Getty)

Kimberly Wang
Kimberly Wang writes about all things pop culture, tech, style, and beauty. She's a Bay Area transplant and has an MFA in Creative Writing from Columbia University. On a sunny New York day, you can find her hanging out with her mini schnauzer Isabelle Jellybean on a blanket in Central Park.
Dresses
Wedding Style
Dresses Royal Wedding Wedding Style
More From Wedding Style