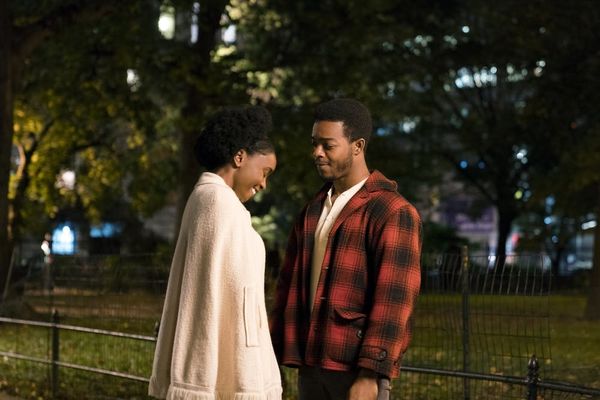 Welcome to Brit + Co’s Weekly Entertainment Planner! Each Monday, we highlight one thing we’re excited about in six categories — movies, TV, music, streaming services, podcasts, and a bonus pick from all of the above — to help you navigate your week in watching and listening. Check out our picks for the week of December 10 to December 16 below. Your eyes and your ears will thank us!

If Beale Street Could Talk (December 14): Director Barry Jenkins’ follow-up to 2017’s Best Picture winner, Moonlight, is an early frontrunner in this year’s awards season, earning three 2019 Golden Globe nominations even before its official release to the public. See why for yourself when this beautiful story — about a woman trying to free her wrongfully convicted husband before the birth of their child — opens in theaters on Friday, December 14. (Photo via Tatum Mangus/Annapurna Pictures)

Hometown Christmas (December 16): Several former One Tree Hill stars costarred in the Lifetime holiday movieThe Christmas Contract earlier in December, and now it’s Stephen Coletti’s turn. Coletti plays the high school sweetheart of Noelle Collins (7th Heaven‘s Beverley Mitchell), who returns home to Louisiana for the holidays to resurrect her town’s live nativity scene. Old wounds resurface between the two, but as they work together on the nativity, the hurt feelings soon give way to other emotions. Watch Hometown Christmas on December 16 at 8pm ET on Lifetime. (Photo via Lifetime)

Fuller House, Season 4 (December 14): Season 4 of Fuller House looks to be all about Steve and DJ finally giving their relationship a fair chance. As far as the rest of ensemble cast, Kimmy (Andrea Barber) is now very pregnant with Stephanie’s baby, and Danny (Bob Saget), Uncle Jesse (John Stamos), Joey (Dave Coulier), and Aunt Becky (Lori Loughlin) head home for the holidays. Watch season 4 when it arrives on Netflix just in time on Friday, December 14. (Photo via Mike Yarish/Netflix)

Sleep With Me: Is the stress of the holidays getting to you yet? Sleep With Me is a podcast designed to help you fall asleep quickly and get a good night’s rest. Host Drew Ackerman will lull you to dreamland through unique and comforting bedtime stories. Listen online, or subscribe wherever you get your podcasts.

Chilling Adventures of Sabrina, “A Midwinter’s Tale” (December 14):Chilling Adventures of Sabrina won’t return for season 2 until April 2019, but in the meantime, Netflix will release a Christmas special called “A Midwinter’s Tale” to tide you over — and get you in the witchy holiday spirit. Check it out on Netflix on Friday, December 14. (Photo via Dean Buscher/Netflix)