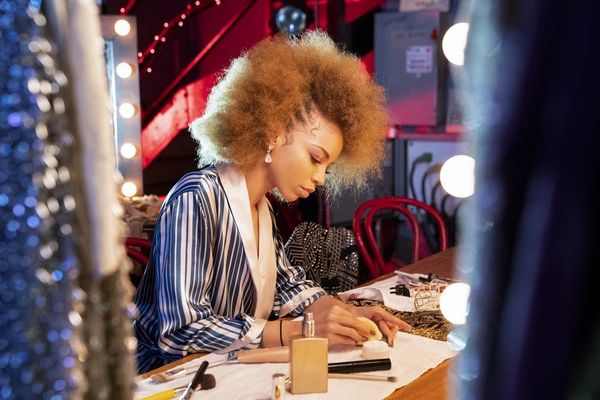 Welcome to Brit + Co’s Weekly Entertainment Planner! Each Monday, we highlight one thing we’re excited about in six categories — movies, TV, music, streaming services, podcasts, and a bonus pick from all of the above — to help you navigate your week in watching and listening. Check out our picks for the week of November 5 to 11 below. Your eyes and your ears will thank us!

The Grinch (November 9): It’s November, which means we can officially start diving into all things Christmas without any guilt. The latest adaptation of the classic Dr. Seuss story is another animated take, with Benedict Cumberbatch voicing the Grinch, Cameron Seely (The Greatest Showman) as Cindy Lou Who, and Rashida Jones as Donna Lou Who, Cindy’s mother. Cindy Lou plans to capture Santa to thank him — but will the Grinch interfere when he comes to Whoville to steal Christmas? Check it out in theaters on Friday, November 9. (Photo via Illumination/Universal Pictures)

Real Housewives of New Jersey season 9 (November 7): After learning to coexist last season, Teresa Giudice and Melissa Gorga are back at it, promising a dramatic ninth season of the favorite franchise. RHONJ has two new additions in Jennifer Aydin and Jackie Goldschneider, and they look to be diving headfirst into the messy, wonderful world of the Housewives. We can’t wait. Watch the season 9 premiere on Wednesday, November 7, on Bravo. (Photo via Tommy Garcia/Bravo)

Westside (November 9): What do you get when you combine The Hills with Glee? Apparently, Netflix’s new docuseries Westside, which follows a group of aspiring (and often struggling) musicians trying to make it in Hollywood. Sounds perfect for a Sunday afternoon binge-watch! Check it out when it arrives on Netflix on Friday, November 9. (Photo via Matthias Clamer/Netflix)

Her Money: Arming yourself with information is empowering, and on Her Money,Today Show financial editor Jean Chatzky aims to help you do just that by talking all things money for women, including budgeting, how to make smart investments, how to earn financial independence, and more. Listen online or subscribe wherever you get your podcasts.

Maddie Poppe, “Keep On Movin’ On”:American Idol season 16 winner Maddie Poppe released the colorful and story-filled video for her new single “Keep On Movin’ On” this week, and Brit + Co was lucky enough to premiere it! We can’t get this tune out of our heads — and can’t stop thinking about Poppe’s advice to “get back up and keep moving on when the going gets tough.” Check out the video and song here. (Photo via Brittany Griffin)

Outlaw King (November 9): Are you ready to see a lot — like, ahem, literally all of — Chris Pine? The actor stars in Netflix’s latest big-budget feature film, a historical drama about Scottish rebel Robert the Bruce’s fight for his country’s independence from England. Check it out when it drops on Netflix on Friday, November 9. (Photo via Netflix/David Eustace)