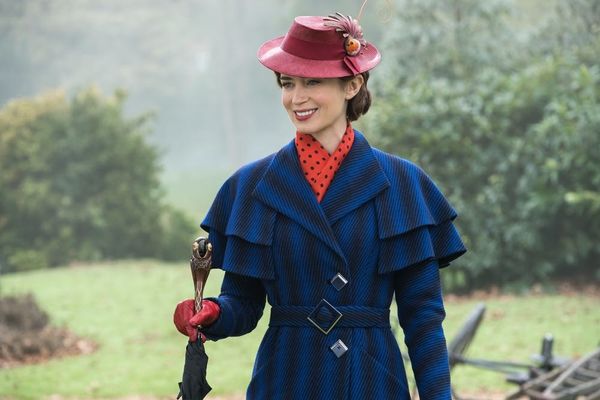 Welcome to Brit + Co’s Weekly Entertainment Planner! Each Monday, we highlight one thing we’re excited about in six categories — movies, TV, music, streaming services, podcasts, and a bonus pick from all of the above — to help you navigate your week in watching and listening. Check out our picks for the week of December 17 to 23 below. Your eyes and your ears will thank us!

Mary Poppins Returns (December 19): The most festive bit of non-Christmas-related joy to hit the theater all year is finally here. Emily Blunt stars as the titular nanny in this sequel of sorts to the 1964 Disney classic, and it promises to be be absolutely magical. Check it out in theaters starting Wednesday, December 19. (Photo via Walt Disney Studios)

Timeless series finale (December 20): The sci-fi travel drama was canceled for a second time by NBC in June, but it’s returning to the small screen one last time with a two-hour, holiday-themed series finale. Tune in on Thursday, December 20, at 8pm ET on NBC. (Photo via Darren Michaels/Sony/NBC)

Ellen DeGeneres: Relatable (December 18): The beloved comedian makes her return to standup for the first time in 15 years with her Netflix special Relatable. DeGeneres recently told the New York Times she’s looking forward to getting out of talk show host mode and showing another side of her personality in the set. Check it out when it arrives on the streaming service on Tuesday, December 18. (Photo via Netflix)

Christmas Past: Why not soundtrack your Christmas errands with this podcast that celebrates holiday nostalgia while also telling the stories behind some of the season’s most beloved traditions? Listen online, or wherever you get your audio content.

Spotify’s Top Female Artists of 2018: The music world is in year-end list-making mode, and that includes streaming giant Spotify. When you’re done looking back at your own listening year with their #2018Wrapped feature, check out the Top Female Artists of 2018 playlist, an excellent compilation of some of the standout women who ruled our speakers this year. It’s not only a celebration of the year that was, but an exciting look ahead at what’s to come. (Photo via Bennett Raglin/Getty Images for FIJI Water)

Christmas Made to Order (December 23): If you’re like us, you’ve already been curling up with Hallmark’s Countdown to Christmas programming for almost two months now. Assuming you’re not yet tired of the feel-good flicks, the night before Christmas Eve is the perfect time to watch yet another one. Christmas Made to Order airs on the Hallmark Channel on Sunday, December 23, at 8pm ET. (Photo via Fred Hayes/Crown Media)