Why Oat Milk Is Suddenly All the Rage 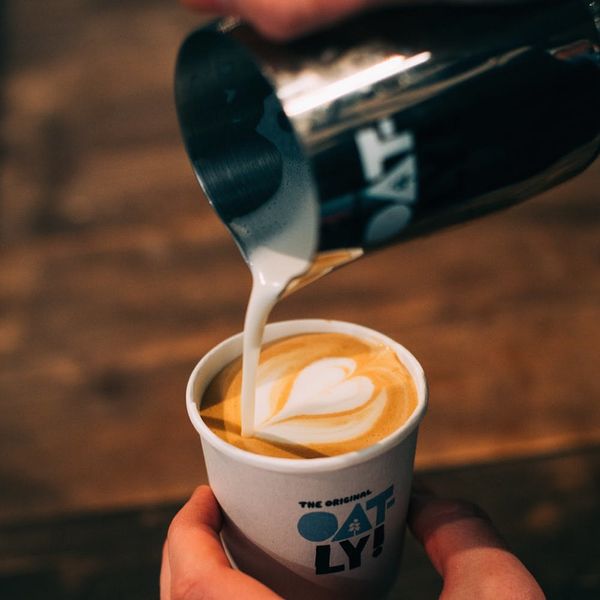 Over the last few months, you may have noticed a new vegan milk option at your local coffee shop: oat milk. I’ll be honest; when I first heard I could turn my cappuccino into a capp-OAT-ccino, I rolled my eyes. Could LA be anymore, LA? Turns out, oat milk isn’t an LA thing. It’s a Swedish thing created by the company Oatly, founded back in the 1990s. That’s right; a little before Train was singing about the, “best soy latte you ever had,” the best oat latte was in the works.

Professor Rickard Öste and his research team at Lund University created an enzyme technology to transform fiber rich oats into nutritional liquid food for humans, without wasting as much water as possible. Since then, Oatly has grown tremendously throughout Europe. Oatly is available in more than 20 countries throughout Europe, Asia, and North America. In September of 2016, Intelligentsia in New York City became the first and only American coffee shop to carry it. It wasn’t until 2017 that other coffee shops across the country got on the oat milk train. Today, you can order Oatly with your coffee at over 1,300 cafes (and growing) in the United States (check the company’s website for locations near you). As of now, it is harder to find Oatly at grocery stores than coffee shops, but you can order Oatly directly to your door online.

I hunted down a half gallon of Oatly to write this piece. I was pretty convinced there was no way I’d finish the entire carton and would be back to my usual Trader Joe’s unsweetened almond milk in a flash. But when I tried Oatly in my coffee and then on its own, all that changed. It was love at first sip. I found Oatly to be creamy, velvety, and rich like whole milk, but without the stomachache (as much as I deny it, I am lactose intolerant). It really made my bland morning coffee taste pinky-up-fancy.

I now understand why Oatly calls itself, ”the milk alternative that doesn’t taste gross.” It really doesn’t taste watery, bland or chemical-y like most milk alternatives. And when put in a milk frother, it foams up just like regular milk. There’s no dairy, nuts, gluten, or added sugar in their original flavor, so it’s pretty perfect for the person who’s allergic to everything. Even in the aisles of Whole Foods, a natural milk substitute is a tall order. Most, including the simplest unsweetened almond milk, have ingredients like xanthan gum, which is used to thicken the milk so it mimics dairy. Oatly doesn’t need any of that, because oats naturally thicken the milk. The only milk replacement with just one ingredient is a can of coconut milk, but the distinct, tropical flavor of coconut milk can be too overpowering at times. Oatly, meanwhile, has a subtle, neutral, bottom-of-the-bowl-of-cereal-milk flavor. It’s naturally sweet, but not too sweet, making it easy to use in both sweet and savory recipes.

To my surprise, I went through my half gallon of Oatly in just under a week. I discovered I could easily use Oatly for anything I’d normally use milk for, and it tasted more like a luxury than a sacrifice. Not only did I find myself putting Oatly in my morning coffee, but I was throwing it into smoothies, whisking it in scrambled eggs, and baking it into zucchini muffins. If you check out #Oatly on Instagram, you’ll see customers across the world using it in everything from tuna casserole and Fettuccine Alfredo to fluffy pancakes and velvety brownies.

The only real downside of Oatly is it contains a lot less protein than standard milk (three grams of protein versus eight grams for one cup). If nutritional facts concern you, per serving Oatly has 140 calories, seven grams of fat, 16 grams of carbs, and seven grams of sugar (FIY, this is from the oats, as there is no sugar in the actual list of ingredients). Since Oatly is such a great milk substitute, where’s the Oatly ice cream, yogurt, creamer, or protein drinks? As of now, they exist in other countries, and hopefully, those products will land in the US soon.

Gabi Conti
Gabi Conti has two passions in life: food, and dating. She went on 10K hours of dates in her 20s and is sharing her knowledge in her first book 20 Guys You Date In Your 20s, which drops with Chronicle in the spring of 2020. Gabi is a writer and host, who currently hosts and writes a weekly entertainment show Hollywire Vlogs, she wrote and hosted 423 episodes the Elite Daily Show for Verison’s go90 and Elite Daily. She has contributed dating and wellness articles to Cosmopolitan, Hello Giggles, POPSUGAR, mindbodygreen, and Elite Daily. You can follow her on Instagram @ItsGabiConti.
Coffee
Healthy Eating
Coffee Healthy Living Shopping
The Conversation
More From Healthy Eating