15 Must-Read Books Gracing the Bookshelves of Your Fave Celebrities 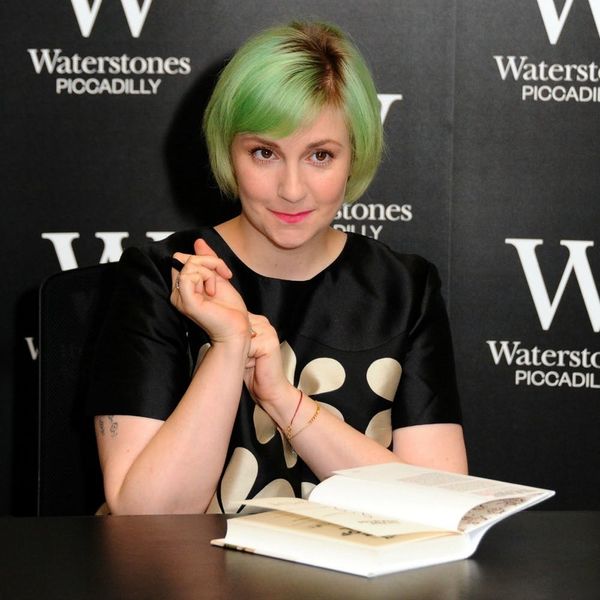 We love getting the inside scoop on how our favorite celebrities live — from how to get Instagram-worthy hair to manicure tips that changed our nail game forever. With celebrity books coming out in droves, we’re dying to get in on another inside scoop: what reads our fave celebs keep on their bookshelves. Lucky for us, BJ Novak’s The List App has the lowdown. One of their listmakers, indie bookstore Strand Books, asked celebrities which books made it into their personal library — and some of their answers just might surprise you.

Just like her wildly successful memoir, Not That Kind of Girl ($10), Lena Dunham showcases the feminist girl boss we all know and love with her extensive 63 bookshelf picks. Here are a few of our faves on her list. (Photo via Stuart C. Wilson/Getty)

1. The Girls’ Guide to Hunting and Fishing by Melissa Bank ($11): Lena Dunham, the OG #girlboss herself, packs her bookshelf with awesome reads that showcase the many different facets of growing up in the modern age. Hitting on basically everything we love about the HBO comedy Girls, Bank’s millennium novel explores love, sex and relationships through a super-relatable protagonist.

2. Bastard Out of Carolina by Dorothy Allison ($10): Compared to kickass literary novels like To Kill a Mockingbird and Catcher in the Rye, this dramatization of poor whites in the South is a must-read for everyone. You might have to order it in on Amazon, since it’s been banned by schools and libraries across the US.

3. The Love Affairs of Nathaniel P. by Adelle Waldman ($10): Covering the life of a self-absorbed writer in NYC, this novel is a great read for twenty-somethings. Featuring a protagonist who claims to be an enlightened feminist, yet whose actions reveal he’s something else entirely, it’s a powerful expose on modern dating that’s impossible to put down.

Host of the Emmy-winning Project Runway, Tim Gunn puts his love of art into his clothes and his bookshelf. Here are a few of our picks from his list. (Photo via Larry Busacca/Getty)

4. Queen of Fashion: What Marie Antoinette Wore to the Revolution by Caroline Weber ($15): Leave it to fashion expert Tim Gunn to have this tale of Marie Antoinette’s extravagant royal style on his bookshelf. In this beautifully illustrated history, the ill-fated French queen is chronicled in all of her fashionable glory .

5. Daybook: The Journal of an Artist by Anne Truitt ($13): The seven-year journal of acclaimed American artist Anne Truitt, this raw and emotional reflection on purpose, inspiration and daily distractions will leave you wanting more.

6. The Heart Is a Lonely Hunter by Carson McCullers ($9): At just 23, Carson McCullers’ debut novel became a sensation in the 1940s. Following the life of the deaf-mute John Singer and his band of misfits in a small Georgia town, it’s a book that everyone should read at least twice.

With two NYT Bestselling books under his belt, it’s no surprise that BJ Novak’s personal library is packed full of interesting reads, including a fair few from his co-workers. Here are our top picks from his list. (Photo via Jemal Countess/Getty)

7. The Philosophy of Andy Warhol (From A to B and Back Again) by Andy Warhol ($9): The Office writer and actor BJ Novak’s bookshelf is an eclectic mix of young and old with a cultural flair. This loosely-formed autobiography by the artist extraordinaire himself explains Warhol’s taste on everything from sex to food to money, all while staying true to the Warhol-ian way.

8. You by Caroline Kepnes ($10): The American Psycho for the digital age, this debut thriller from Caroline Kepnes will definitely have you sleeping with the lights on. Following the story of an aspiring writer turned stalker victim, it’s eerie, creepy and impossible to put down.

9. Why Not Me? by Mindy Kaling ($9): With a whole chapter devoted to BJ and Mindy’s soup snake relationship, it’s no wonder that Mindy’s latest book of essays is on BJ’s bookshelf. Heck, he probably has a first draft laying around somewhere too.

With 47 books in his virtual bookshelf, from nightmare-inducing thrillers to bookish histories on just about everything, the resident Mr. Sulu is a literary chameleon. Here are a few of our faves on his list. (Photo via Jason Merritt/Getty)

10. Between the World and Me by Ta-Nehisi Coates ($14): When the Star Trek star isn’t making us belly laugh on Facebook, you can find him curled up with a good NYT Bestseller like Ta-Nehisi Coates’ powerful memoir on race in America.

11. Inventology: How We Dream Up Things That Change the World by Pagan Kennedy ($17): Have you ever had a ground-breaking idea that you thought would change the world? In Kennedy’s latest non-fiction, she dives into the world of how inventors first created their life-changing ideas and how today’s tools can help inspire even more.

Did you know that 1970s rock legend Patti Smith is a resident lit chick? With her bookshelf overflowing with old school literature, she’s a Rock and Roll Hall of Famer with a heart for the classics. Here are a few must-reads from her list. (Photo via Jeff J Mitchell/Getty)

13. Moby Dick by Herman Mellville ($11): Punk rocker Patti Smith’s bookshelf is riddled with the literary fiction of yesteryear — including Melville’s classic tale of the sea. Sure, you might need a little extra motivation to start this 800-page-plus classic, but once you do, life on board the Pequod will definitely keep you hooked (pun intended).

14. Wittgenstein’s Poker: The Story of a Ten Minute Argument Between Two Great Philosophers by David Edmonds and John Eidinow ($11): What happens when two great philosophers of the time meet? They debate for ten minutes, and then leave in a huff. Following the history of philosophy in the twentieth century, this can’t-put-it-down read might just make you wish you paid more attention in Intro to Philosophy.

15. Little Women by Louisa May Alcott ($13): Another one of Patti’s favorite literary classics, Little Women tells the story of four sisters who have to rely on each other while their father is away. Let’s just say it’s not as easy as it sounds.

What celebrity bookshelf do you want @StrandBookstore to compile next? Let us know via Twitter by mentioning @BritandCo.

Ashley Macey
Ashley Macey is a lifestyle freelance writer who loves all things fitness, wellness, and creativity. When she's not exploring her home in the Pacific Northwest with her dog Max, you'll probably find her curled up with a good book and some hot tea. Follow her daily jaunts on Twitter.
Books
Home News
Books