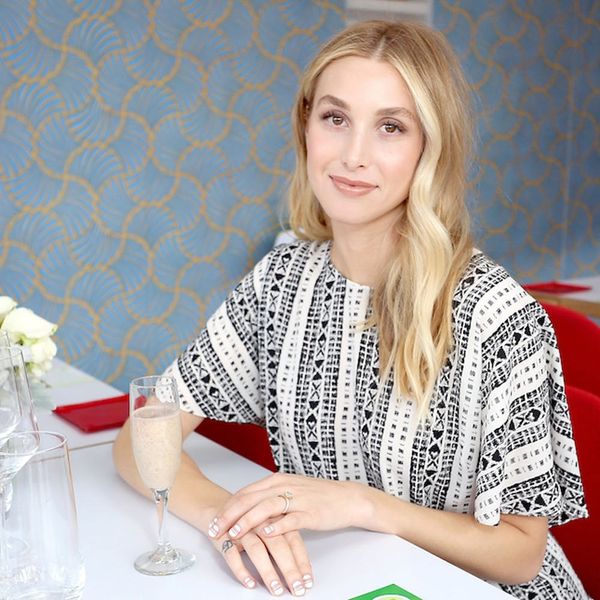 Two bachelorette parties, a bridal shower and several teases on Instagram later, designer and The Hills alum Whitney Port is finally married. You’re probably thinking that the happy couple have jetted off somewhere and are probably swimming in the ocean at some exotic locale with coconut drinks in hand for their honeymoon, right?

Nope. At least not right this sec. In a video interview with People, Whitney revealed that she plans on doing a whole lot of… nothing. But that’s not all. Also on her to-do list is “lounging and relaxing, talking and gossiping about the whole wedding,” she says. Sounds like a jam-packed honeymoon, Whitney!

You can watch Whitney’s full People video below.

On the same super low-key note (we’re sensing a trend here), comedian Charlyne Yi (you might remember her from Judd Apatow flicks like Knocked Up and This Is 40) is also headed down the aisle soon… if there’s going to be an aisle at all. The actress made an appearance on Conan last night to discuss her wedding plans — or lack thereof.

“Nothing’s going to change too much. We’re still going to live at our own houses,” she revealed. That’s certainly unconventional, but hey, whatever floats their (respective) boats. And as for venue? We-ell, there isn’t really one. “I feel like other adults are like, ‘Oh, we booked a place. You gotta meet at the thing.’ But we’re meeting at a secret hill behind some houses that you have to walk up to.” Conan cut in to ask, “Is this hill in a park or something you can rent so you can get the space?” Charlyne laughed and said, “No, we’re just gonna do it. We’re just kind of trespassing.”

Check out her video below.

While we certainly can’t recommend anyone break laws for their wedding day, we’re definitely feeling this low-key honeymoon and wedding vibe that seems to be circulating.

For more DIY wedding ideas — we have the hookup ;)

What do you think of Whitney’s honeymoon plans and Charlyne’s wedding plans? Sound off in the comments below!

Kimberly Wang
Kimberly Wang writes about all things pop culture, tech, style, and beauty. She's a Bay Area transplant and has an MFA in Creative Writing from Columbia University. On a sunny New York day, you can find her hanging out with her mini schnauzer Isabelle Jellybean on a blanket in Central Park.
Celebrity Wedding
Wedding Planning and Decor
Celebrity Wedding
More From Wedding Planning and Decor