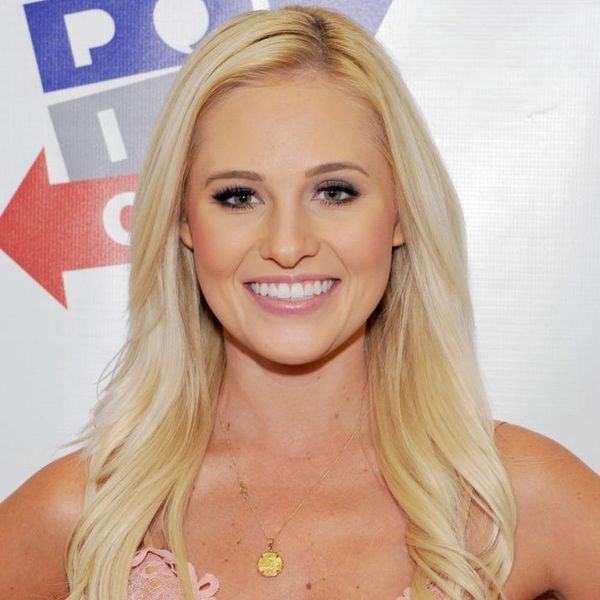 You’ve probably heard by now that over the weekend, comedian Chelsea Handler and conservative internet personality Tomi Lahren had a chat about “the issues” at Politicon in Pasadena, California. Any meeting of two women with such diametrically opposed political views (Handler is unapologetically liberal, and Lahren is an on-again, off-again right-wing darling) was bound to stir up some buzz, but people are really honing in on one off-hand comment from Lahren about health insurance.

Today is the day. If you can't be @Politicon don't worry, I am doing everything I can to be able to LIVE stream the debate on my official Facebook page (link in bio). Debate is 4-5pmPT. Silent Majority, this is for you. Let's give em hell. #TeamTomi #politicon #tomivschelsea

24-year-old Lahren, who has railed against Obamacare many times in the past, told Handler that she is still on her parents’ health insurance. This is notable because the law that allows people under 26 to remain on their parents’ health insurance is an Obamacare policy. So, Lahren admitted to enjoying the benefits of a policy she actively roots against. Even in the same interview at Politicon, she admitted: “I do believe in repealing Obamacare.”

The hypocrisy here is obvious, and as Jezebel suggested in a story about Lahren’s comments, the 24-year-old Obamacare beneficiary seemed not even to realize that she was enjoying an Obama-era policy. Despite the possibility that she doesn’t really understand much about the health insurance policy she speaks against, Lahren doesn’t stop herself from parroting conservative commentary on the subject.

Without a whiff of irony, Lahren told Handler she believes “that [the Affordable Care Act] fails the very people that it’s intended to help.” In a sense that’s true, given that Lahren (who has plenty of money from her work as a speaker peddling anti-ACA beliefs) benefits from Obamacare, while other women with fewer means are struggling to cover their healthcare costs.

Hannah, a 28-year-old living in Brooklyn, tells Brit + Co that, as a young woman who can’t afford health insurance, Lahren’s comments are extremely frustrating. “It makes me feel like my situation as a single woman working and living alone without much family support is one she doesn’t understand or respect,” she tells us. Hannah served in the Peace Corps for two years and returned to the US this past spring, where she quickly launched a career as a freelance writer. She’s been without insurance since she got back, and says that the financial and emotional challenges of life without health insurance are not easy to overcome.

Like many women, Hannah struggles with mental health issues and takes medication to treat depression, anxiety, and PTSD. Because she’s full-time freelance, Hannah doesn’t have an employer to provide health insurance plans, which means she’s stuck covering expenses on her own. This means about $90 a month for her Lexapro prescription, and whatever other medical expenses may come up are also totally out of pocket. Whether it’s treating strep throat or the UTIs she says she often gets, the financial burden of appointments and antibiotics is often out of reach for her.

Hannah is far from alone. According to the Kaiser Family Foundation (KFF), more than one in 10 women (11 percent) between the ages of 19 and 64 were uninsured in 2015. In a 2016 report on women and health insurance, the Foundation wrote that most people stay uninsured because of cost. This is something that Lahren, in her funemployment after being fired from The Blaze a few months ago, doesn’t have to worry about, but it’s a huge issue for Hannah and other uninsured women.

The KFF reported in 2016 that “low-income women, women of color, and immigrant women are at greater risk of being uninsured” than other women. (Note: Lahren belongs to none of these groups.) While the ACA does not make health insurance “affordable” for everyone, it’s still important to understand that millions of women are in fact able to afford health insurance now thanks to Obamacare.

Between 2010 and 2015, 16.3 million adults got health insurance through the ACA, 7.5 million (that’s 46 percent) of whom were women. Obamacare requires that “essential care” is covered by insurance, including a significant number of services that are necessary for women, including maternal and infant care, wellness screenings, and prescriptions, including birth control.

It’s a fact that many women still face the myriad health and financial difficulties of being uninsured, despite improvements to health insurance coverage introduced by Obamacare. It’s also a fact that millions of women have improved access to the care they need thanks to Obama-era healthcare policies. Since Tomi Lahren doesn’t even need help from her parents and the government to afford health care, but is taking advantage of these resources anyway, she may want to reconsider her desire to yank it all away from the people who require it.

What do you think about Tomi Lahren’s Politicon conversation with Chelsea Handler? Tell us on Twitter @BritandCo.