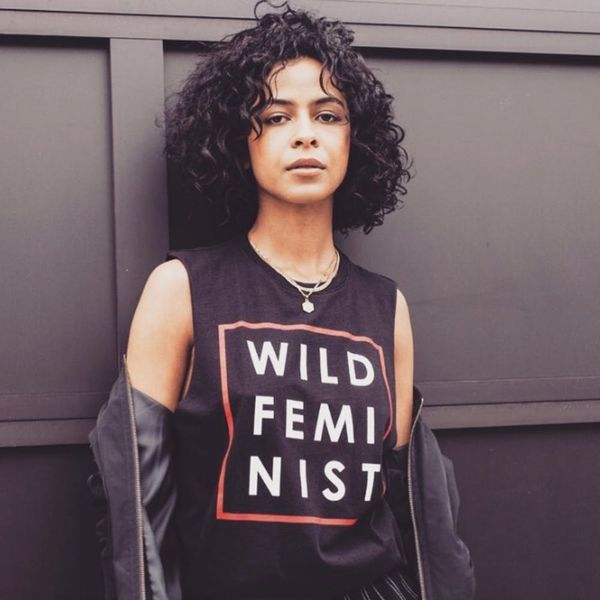 Emma McIlroy was all too familiar with the experience of going shopping — for clothes she felt good in, clothes that made her feel like herself — and coming home with nothing. The men’s section stocked things she liked, but the clothes didn’t fit her. The women’s section offered clothes in her size but not in styles she wanted to wear. Instead of resigning herself (and her look) to something that didn’t express who she was, she decided to make the kinds of clothes she wanted to wear — not just for herself, but for everyone who felt like she did. And that’s how Wildfang was born.

“My best friend and I were shopping in the men’s department at a local clothing store. I was shopping for a bold, provocative graphic tee — which you never find in women’s section. Everything there is always floral and bohemian. My best friend wanted a cool blazer and found one she loved in men’s department but it was way too big for her. That got us thinking: Why are there certain styles you aren’t allowed to wear because of your gender? Why are women restricted from buying certain styles?

“We decided to start a company that allowed women to express themselves however the hell they wanted,” says McIlroy. Wildfang’s growing fan club (including some super-famous trendsetters like Janelle Monae) is proof that McIlroy and her collaborators are onto something. That brand love encouraged McIlroy to make Wildfang into something bigger and more meaningful than your average clothing retailer.

It’s in the company’s mandate to donate a portion of their profits to the ACLU and Planned Parenthood and they regularly host “Free Speech” safe space storytelling gatherings at their Portland store. Some of their customers have responded by tattooing themselves with the Wildfang logo — the kind of devotion that’s usually reserved for hometown teams.

We talked to Emma McIlroy about her close relationship with her Wildfang community and how they inspire her to continue to give back.

B+C: Fashion can be used to tell the world something about who you are and even what you believe in. Style is so personal and we’re curious to know why you wanted to make menswear clothing designed to fit women as opposed to, for example, completely unisex clothing?

EM: Well, unisex clothing didn’t seem as fun. It seemed to be missing personality. We felt more like female Robin Hoods who were stealing our styles from the mens department. This brand was founded by a few rebellious women who wanted to break all the silly gender rules in fashion. We’ve always had that at our core.

Because you can’t be anyone else. #TransgenderDayofVisibility

B+C: Can you share with us some of the feedback you’ve gotten from your Wildfang customers? What has the brand given them that they couldn’t find before? It seems like the kind of thing that might affect people beyond just giving them one more place to shop.

EM: We have the most amazing fans. We’ve had people get tattoos of our logo and of #YeahMaybe. We’ve had people change their flights to come to our store in PDX. We’ve had people travel to PDX to shop our store with completely empty suitcases, just so they can carry all the clothes they buy back. When we funded the abortion clinic in Sioux Falls, South Dakota, many women wrote to us or came into to our stores to tell us about their abortion and say thank you for the support and love. When we supported Joyful Heart on Giving Tuesday, customers wrote to us about [sexual assault] and how thankful they were that we were trying to help. This is why we do what we do. We exist to serve our community and to hopefully create a place where women can be their truest, best selves.

B+C: We covered the whole situation where a certain major retailer (*cough* Forever 21 *cough*) may have “borrowed” one of your most iconic designs, the Wild Feminist t-shirt. As a smaller retailer, how hard is that to go up against and to get the credit for your own work?

EM: Yeah, that sucked. The problem is we don’t have the time or money to fight the big guys in court, so we’d rather just get busy creating and being original. That’s where our time is best spent. At the end of the day, we’d rather be leading the pack than following it.

B+C: Your company donates some of its profits to organizations like Planned Parenthood and the ACLU. As the company’s CEO, what does it mean to you to support those organizations?

EM: Supporting the community is a critical part of being a feminist. You have to work hard to give a platform and voice to those in the community who need it most and giving back is a part of that. I’m so f*cking proud of the work we do and the impact we make.

B+C: We watched the TED Talk you did last year in Portland about how being a ‘Yeah, maybe’ person as opposed to a ‘Yeah, right’ person was the big thing that helped you launch Wildfang. Can you talk about that philosophy? Is it something you’re still using today?

EM: I remind myself of #YeahMaybe every single day. It’s a practice. And it’s the key to creating potential and opportunity. When you say ‘yeah, maybe’ rather than ‘yeah, right!’ you leave yourself open to possibility and usually end up achieving more than you could’ve imagined. It’s just the tiniest shift but it’s really hard to remind under stress, when sh*t is hitting the fan.

What does your personal style say about you? Tell us about it on Twitter.

(Images via Wildfang and Emma McIlroy)

Corrina Allen
Corrina Allen is a film + television + travel writer from Toronto. Her journalistic goals include a backstage interview with David Byrne, the fictional character she identifies most closely with is John Wick, and her favorite dead person is Vladimir Nabokov. She never, ever Instagrams photos of her food (just her dog).
Ladies First
Gender Issues
Ladies First
More From Gender Issues