Women Who Run: The Fighter Pilot Trying to Land a Seat in Kentucky Congress 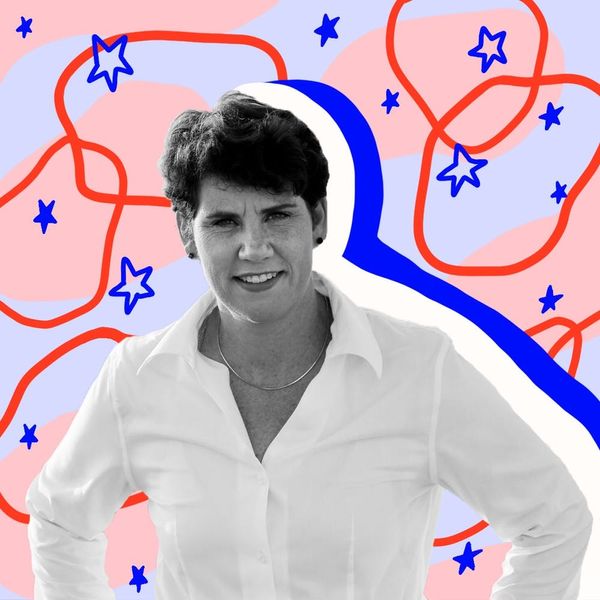 Women Who Run is a series highlighting six female candidates currently running for office. Whether the roles they’re campaigning for are in local, state, or national government, they’re all proof that more women are getting involved in politics than ever before.

Amy McGrath has America’s attention. The retired Marine Lt. Col. launched her Democratic congressional campaign in Kentucky this past August with a powerful video that highlighted her historic achievement as the “first woman Marine to fly in an F-18 in combat.” The clip went viral, and while McGrath, 42, was already confident in her skills as a leader, she admits the reaction to the video was a surprise.

“I’m trying not to get a big head out of it,” she laughs as we discuss her campaign over the phone. McGrath, like many others, felt driven to action after the 2016 presidential election. She was nearing retirement after 20 years in the Marine Corps and, recognizing her privilege of time and resources, her lifelong sense of service to her country took over. She’ll run against Republican incumbent Andy Barr, who, as she says in the ad, “said he would vote enthusiastically to take health care away from over a quarter million Kentuckians.”

McGrath’s mission is not only to protect health care but to redefine good leadership in her state — and to the country. “At the end of the day, the government is made up of people,” she stresses. “It’s not a big, bad beast. It’s people.”

McGrath: There were a lot of factors. The biggest one for me was, like a lot of Americans, the day after the 2016 election, I sort of took a step back and reflected on how I could proactively react to what occurred, where I thought my country was going, and what I wanted for my kids.

It worked out for me personally, because I was retiring, and my husband was as well. When you’re someone who is retired from the military, you have, although you’re not making the same amount while you’re in service, you have something. I thought, there are other 42-year-old women out there who may want to run for office, who also have three small kids, but they have to work. They don’t have the flexibility that I have. I have to do this. Yes, it’s a sacrifice, and it’s really rather stupid financially! But I have to do it. We need more women. We need more veterans. I’m all of those things, and I have a desire and want to lead.

B+C: It seems like that desire to lead and serve was with you from a very young age. Where did that come from?

McGrath: My role models were my parents. They were hard-working Americans. My mother was a doctor, and my father was a high school teacher who took me and my brother and sister around in the summertime to visit historical sites around the country, especially Kentucky. It really instilled in me a love of American history. Some of my patriotism comes from that.

B+C: What initially introduced you and made you interested in being a fighter pilot?

McGrath: I used to watch the History Channel, and one time, there was a special on fighter pilots and jets in the United States. Somebody had said on that documentary that the best pilots were the ones that could fly and land on aircraft carriers, and I thought, that’s what I want to do. I was a young tomboy, very athletic, and at that time, for a girl to just roll in and beat all the guys at sports, it gave me a confidence. When I saw that, I thought, “Well, that’s what I want to do. I can do tough things.”

McGrath: The number one issue when I talk to people around here, and that I will fight for for them, is health care. Kentucky has been a success story for the Affordable Care Act. It’s not perfect, but we need to make sure that we don’t get set back to the way things were 10 years ago. That would hurt a lot of Kentuckians. We need to fix and tweak what we have and make it better.

The other issues align with the values that I have. The biggest thing is getting someone in office who is of character and integrity who isn’t going to lie to people and not going to bring simplistic solutions to very complex problems, from immigration to environment and national security, and all of the major issues we have today.

McGrath: Healthcare, for one. Two, let’s stop demonizing immigrants and start working to bring them into society. In terms of jobs, we need to diversify our economy. The opioid crisis is another thing. Those are in addition to the American values that I fought for and stood for. Standing up for minorities, diversity, equal opportunity — these are the things that are strikingly different between my opponent and myself.

B+C: It’s clear your message is resonating so far — your campaign announcement video went viral. Were you surprised by how big it was?

McGrath: I was very surprised. The truth is, we need people who are grounded. One of the cool things about being a mom to three young kids is that I’m definitely grounded every day. I do feel that people around the nation are just hungry for someone to stand up and, what I call, raise the “bullshit flag.” We can’t even have a conversation anymore without each ripping apart the other side, and it’s hurting us. It’s hurting our nation. Nobody looks at people in political office as leaders anymore. Right now, I worry that we don’t have any. I want my kids to grow up and look at political leaders and say, “Hey, that was a good person. That was someone who cared about the country, who was a public servant, who did a lot of good.”

B+C: Something that seems to be coming up a lot now is that party division. How do you see it working productively going forward?

McGrath: Three things. One, more women in Congress will help. We collaborate better and egos aren’t as big. I’m generalizing here, but I think, why not? Let’s give it a shot. Two, more veterans in Congress would help. We have a shared mission — our country comes first. I never looked at my wingman and said, “Are you a Republican or a Democrat?” The third thing, as I mentioned earlier, is the money in politics. It’s very scary, and it’s driving polarization. I don’t have huge solutions right now, but I think these are some of the problems.

B+C: Do you hope your visibility helps remove some of the barriers women face in running?

McGrath: My mother worked full-time as a pediatrician in the ‘80s when I was growing up, at a time when not a lot of women worked outside the home. I remember lots of people saying to me, “Don’t you wish your mom was at home?” And I remember being five or six years old, and thinking, no. I’m proud of my mom. She’s out there saving lives. And when she’s home, she’s fully present with us. And when she’s not home, she’s happy, because she’s doing something she loves. I’ll never, ever forget that. I turned out okay. That helped me.

McGrath: Learning to ask for money, just to be very honest with you. I’m always honest, but that is, no joke, very hard! I’ve been a Marine my whole adult life. I’d never asked people to fund me or contribute to me. I had rank, and I earned the respect of my Marines. I’m working on it, and I’m going to get better. I’m getting better every day.

B+C: Speaking of money, how can people support your run?

McGrath: I have a website, and you can donate right online. I’d also tell people what I’d tell my students — I taught US Government for three years at the Naval Academy; it was my last assignment in the Marine Corps. I always told my students to register to vote, and to spend the time to look up the candidates. See their background, look at their experience, as well as what the issues they stand for, and then make your decision. Look beyond the headline.

Nicole Villeneuve
Nicole is an entertainment and lifestyle writer covering pop culture, news, and cool women doing cool things. She likes yard sales, MTV's Teen Mom, and putting too many memes in the group chat. She lives in Toronto.
Women Who Run
Politics
Women Who Run