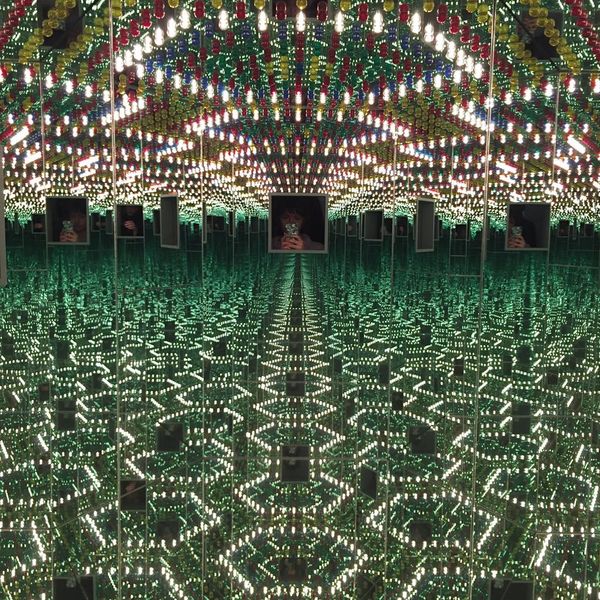 You may have seen the snaps while scrolling through your Instagram feed — polka dots, pulsing lights, mirrored reflections, and a whole lot of selfies. (If not, check out the hashtag #infinitekusama right now.) The Yayoi Kusama: Infinity Mirrors exhibition is made for Instagram, even if the art was made decades before the app even existed. The Hirshhorn Museum and Sculpture Garden in Washington, DC is the first in a line of museums and art galleries to host this unprecedented retrospective of the Japanese artist’s groundbreaking works. It runs through May 14, so be sure to grab a timed pass and check it out for yourself.

I’m lucky enough to live a couple of hours from the nation’s capital, so when I scored two tickets last Monday, I hightailed it to DC after work on Friday to stay with my BFF. Our tickets were for 10:45am on Saturday morning, and our visit lasted until about 2pm — it’s a show that definitely demands your undivided attention. It was dazzling, dizzying, effervescent, and totally fun. It’s the kind of exhibition that you can’t stop talking about, and it stays with you long after you leave the museum. Here are my five takeaways from the transformative exhibition (other than the polka dot sticker I took with me… shhh).

it smells peculiar, the lines are long, and the rooms are much smaller than you think

It’s probably a combination of the mix of Kusama’s materials, the confined spaces, and the crowds of people, but this show has a noticeable aroma. It neither adds nor detracts from the experience — it’s not a pleasant or unpleasant smell — but it’s noticeable and pretty weird. And yes, the lines are long. Three people are allowed in a room for 30 seconds at a time. There are even museum monitors at each door who have stopwatches to keep things running efficiently. It’s a well-run machine that allows you a personal moment with each work, even if that moment is only seconds long.

Before attending the show, I’d only seen the inside of the rooms on the internet — a spotted pumpkin patch here, darkness lit by glowing lanterns there. So I was totally unprepared for just how small the Infinity Mirror Rooms were. I thought I’d be wandering through a gallery-sized room for each installation when, in fact, each room was a self-contained box in the middle of a gallery. Honestly, the photos make the rooms look infinite, or like they could go on forever.

One of the best parts of the exhibition for me was watching visitors’ faces as they experienced and interacted with the art. Older men walked out of rooms with stars in their eyes, confused and smiling, while middle-aged moms giggled and snapped selfies with their teenage sons. (Seriously, these things happened. It was adorable.) It was such a delight to see strangers have a communally creative experience.

Speaking of creatively communal, the Obliteration Room starts as a white-washed living space on the first day of the exhibit. Each visitor is handed a small sleeve of colorful polka dot stickers to put anywhere inside the room. The result is an explosion of color, a polka dotted dreamscape. As I decided where to place my polka dots, my friend said, “Is it possible to feel like I’m a part of something big and insignificant at the same time?” Actually, yes! It’s that exact thought that gives the Obliteration Room its power. You’re one of thousands of visitors contributing a couple dots, but it’s the build-up of these small contributions that makes the piece so impactful. Of course, that philosophy has far-reaching meaning in all aspects of life (deep, eh?). It was nice to be reminded of our small but significant place in the world — and all because of a few stickers in my hand.

Social media and the selfie generation often get a bad rap as egotistical, self-centered, and shallow. The art world often gets a bad rap as, well, egotistical, self-centered, and shallow. Magic happens, though, when the two worlds embrace each other. By encouraging photos, tagging, sharing, and exploring, the Hirshhorn is talking to our Insta-ready world in a language we can understand. And like I said before, Kusama’s mirrored, polka dotted light-up worlds are super photogenic. The result is thousands of people who wouldn’t normally spend a Saturday afternoon at a museum making pilgrimages to see the show because they saw the photos on social media. It was so heartening to see long lines at a public art museum and an awesome reminder of the power of art (*cough* Hear that current administration? *cough*)

creative people are the coolest

Walking through the exhibit, the one thought I had over and over again was, “How did she even think of this?” It’s room after room, wall after wall, of her installations, paintings, drawings, videos, and sculptures. The show is the physical product of hours spent conceptualizing and creating, all from her mind. Kusama is a force of deep, intense creative genius, and to see her work all together makes you grateful for her hard work and bravery to create something so beautiful. I’ll keep my selfies forever.

Have you had a chance to visit the show yet? Tweet us @BritandCo and let us know what you thought of it!