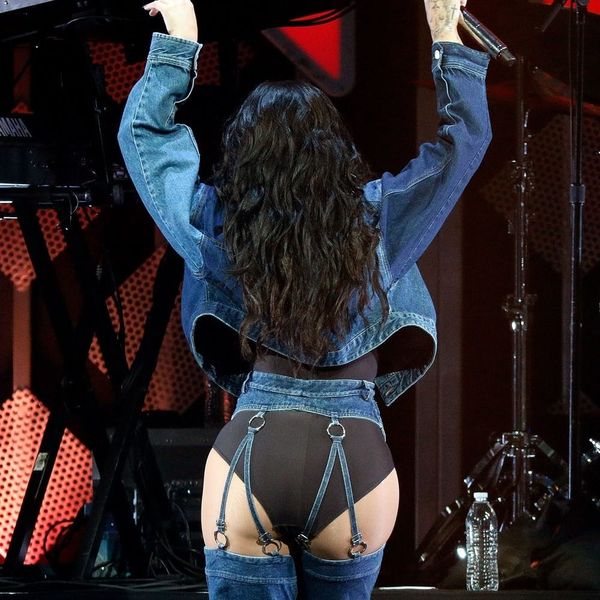 We’re pretty used to head-turning red carpet looks, but nothing could’ve prepared us for Demi Lovato’s out-there ensemble for her performance at Florida’s Jingle Ball. The 25-year-old made us do multiple double-takes with this pair of straight-up denim chaps.

The Cool For The Summer singer rocked her pants (or lack thereof) with a matching denim jacket, a lacy black bodysuit, grapefruit-sized hoops, and pointy white boots. To counterbalance everything going on with her garb, Demi kept her hair loose and tousled, while her makeup consisted of a classic smokey eye and matte nude lip.

We can’t promise we’d wear this look to, say, the office, as far as red carpets go… we say, why not? After all, the Confident singer looks, well, confident. Plus, she demonstrates how exactly one would wear these mind-boggling $570 jeans from French designer, Y/Project.

Though chaps are hardly the norm, we have seen some other celebs pull off the look in the past. Gigi Hadid wore similar (albeit less revealing) Y/Project pants while out and about recently. And who could forget perhaps the most iconic chap moment of all time: Christina Aguilera in her Dirrty music video? While we can’t say chaps will be making an official comeback anytime soon, one thing’s for certain: bravery is required to pull these babies off!

What do you think of Demi’s bold fashion choice? Tweet us @BritandCo!