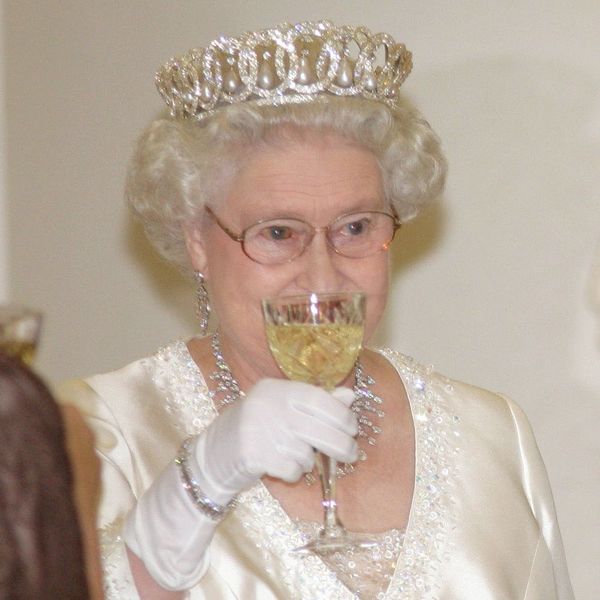 The Queen of England may be pretty darn traditional (did you see her get Prince William in trouble, because OMG!), but that doesn’t mean that, in some ways, she’s a totally modern woman. Her first ever tweet and the epic online shade she threw at the Obamas prove that without a doubt. And now it turns out that the Queen is actually making a little side money in a totally unexpected (and boozy) way.

The side-biz actually started back in 2011, Food & Wine tells us, when “the U.K.’s largest wine retailer, Laithwaite’s, was given permission to plant a vineyard at Windsor Great Park, a Royal Park not far from the Queen’s well-known residence, Windsor Castle.”

Though the vines were pretty much ignored by the royal family in the following years, the plants — which are a combination of Champagne varieties, including Chardonnay, Pinot Noir and Pinot Meunier — were continually tended to, and in 2013, the first harvest took place.

The first release of Windsor Vineyard English Quality Sparkling Wine’s 3,000 bottles finally became available just before Christmas last year and, not surprisingly, quickly sold out. So, is the wine that good? Well, that might not be totally relevant. Frankly, the novelty of a wine from the Queen, created from a vineyard on the royal property, is reason enough for some to pick up a bottle or two.

Tamara Roberts, the chief executive of Ridgeview Wine Estate (which is where the Queen’s sparkling wine was processed and produced), told the Daily Mail, “Rare vintages can go for astonishing prices. It is impossible to guess how much it might be worth one day… but it has all the right accolades, grown on the queen’s estate, the first vintage. Who knows?”

Another reason it’s so popular is the price. Available to pre-order now at British retailer Laithwaite’s, it’s not wildly cheap, but at just £34.99 (or around $45), it’s not a budget-buster either, and is pretty affordable for anyone who’s willing to pay for a little royal (and boozy) experience.

Would you (or someone you know) want to try the Queen’s wine? Tweet us @BritandCo!

Desiree O
Desirée O is a ‘Professional Bohemian’ who loves anything and everything related to the arts, entertainment, and pop culture. She ADORES being a ‘Newsy’ for Brit + Co, covering all of the latest tidbits of awesomeness that you want to read about. When she’s not writing, she’s either making messy art, going on long adventurous walks with her camera, or poking around over at bohemianizm (http://www.bohemianizm.com/). You can find out about Desirée O and her work at http://DesireeO.com/ or follow her on Twitter @DesireeO.
Royal Family
Entertainment
Royal Family
More From Entertainment