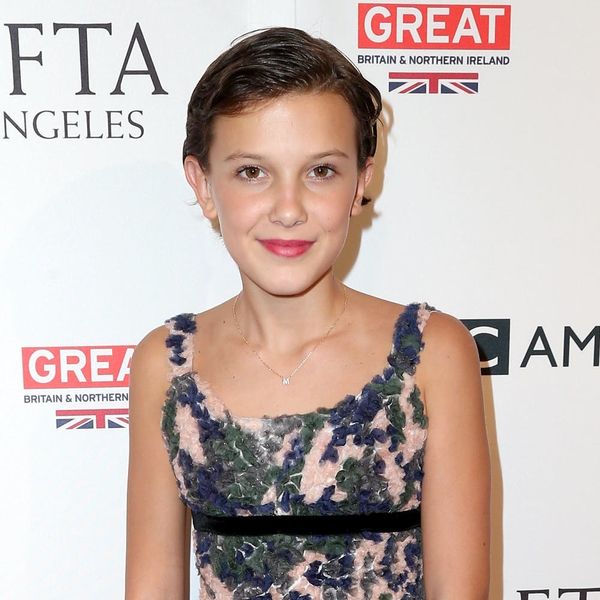 We can’t wait for the second season of Stranger Things to hit Netflix, and while the kids of the show have charmed us both on and off screen (seriously, did you check out their super funky Emmy performance?), it turns out one of those young stars has been stirring up some pricey controversy behind the scenes. We’re talking about the actress who plays Eleven and the $100,000 sitch she’s stuck in.

Millie Bobby Brown, who totally won over fans with her epic break-out performance (as well as shaved her head to land the coveted part), left the kids division of the Paradigm talent agency earlier this year, and since then, has been without representation. Obviously, with her star rising because of her Stranger Things gig, agents are eager to sign her.

The problem? Her dad is doing something that is NOT done in the biz. He’s apparently demanding $100,000 cash up front as a signing bonus. Um, nope. That’s not gonna happen.

Sources at five separate agencies (!) told The Hollywood Reporter that not only can they confirm that Robert Brown, Millie’s dad, did in fact make this bizarre request, but one source claimed that such a move “is completely unorthodox” and “would open a Pandora’s box” by setting a new precedent. Not only were none of the agencies apparently willing to sign such a deal, one blatantly said that they “just would never go there.”

A representative for the Brown family not only didn’t deny the claims, they in fact confirmed that Robert has made the requests, but now say that it was “ill advice from someone outside the industry that was said in jest.”

Joking, jesting or totally serious, perhaps the Browns should stick to expert advice from now on.