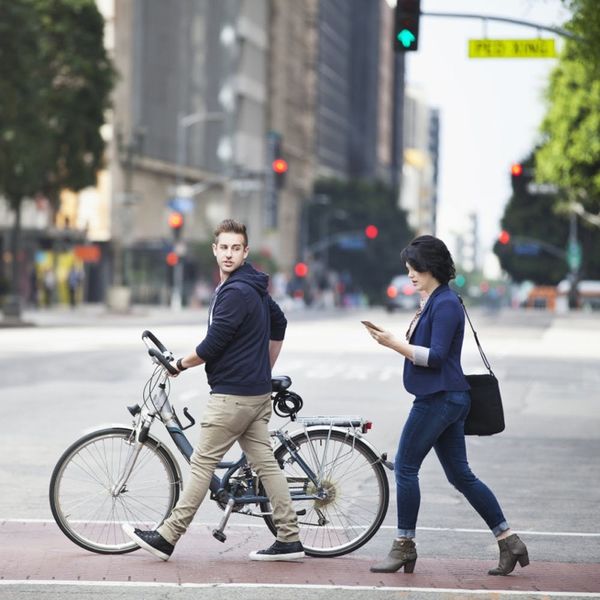 With social-media-induced FOMO and toxic work environments that can make you feel like you need to be plugged in 24/7, it can feel impossible to tear yourself away from your mobile phone. Though burnout and addiction are very real dangers that come with digital devices, using them while on the go can present another problem: your physical safety. In fact, mobile phones are at the heart of recent research and a brand new Hawaiian law — both of which remind us that there’s definitely a time and a place for pulling out a device.

Honolulu, Hawaii recently became the first major American city to ban texting and walking after passing the Distracted Walking Law, which will go into effect on October 25, 2017. The new law prohibits people from stepping into an intersection while looking at a device screen, which includes cameras, tablets, mobile phones, and video games. A distracted walking violation *won’t* apply to anyone making an emergency call, or texting and/or listening to audio on the sidewalk. Penalties for legit distracted walking in Honolulu will begin at $15-35 for a first-time offender but can be as high as $99 for someone who repeatedly violates the law.

Sounds totally crazy? You might change your mind when you learn that mobile phone use in the US has skyrocketed from a mere 340,000 mobile phone owners in 1985 to a jaw-dropping 303 million in 2010. A recent study shows that more than three-fifths of Americans say they use their phone while on the go, while Reuters reports that there were more than 11,000 injuries in the US from 2000-2011 caused by distraction from using a mobile phone while walking. Pretty awful.

The study further proves the impact of distracted walking too. To learn more, researchers investigated how using a mobile phone affects where people look (AKA “visual search behavior”), how they move around hazards in their walking path, and how they adapt to changes in surface height along their path. 21 men and women between the ages of 25 and 31 wore eye trackers and sensors to analyze their motion while walking and writing a text, reading a text, talking on the phone, and without using a mobile phone. Recording definite differences in participants’ direction, speed, and awareness while using a mobile phone, the results demonstrate that people walk slower, move away from a straight line and change direction more, and have reduced situation awareness and/or unintentional blindness. People also used a “cautious stepping strategy,” where they took smaller, higher steps to avoid changes in surface heights on the road (think of the last time you missed a step or a curb because you weren’t paying attention). Writing a text caused the greatest changes in how a person looks at and adapts to their surroundings.

Researchers attribute this to a person’s inability to continuously scan their environment while keeping their eyes on a screen to type, increasing the risk of an accident. The study says that humans need visual information to walk safely, and that the brain needs at least two steps in advance to change direction. What does it all mean? Basically, if you look up and see something right in front of you, it’s already too late for you to walk around or step over whatever’s in your way. Yikes!

So whether you’re soaking up the sun in Honolulu this summer or enjoying time at home, remember to take caution when using your favorite device on the fly. If you need to fire off an email or quick text, try to do it while enjoying a coffee at a café, sitting on a park bench, or even stepping aside for a minute to chill against a building, rather than while in motion. It’s definitely better to be safe than sorry.

Have you made changes to the way you use your digital devices while on the go? Share how you use them safely @BritandCo.

Krista Gray
Krista Gray is a web producer and freelance writer who lives in San Francisco. When she's not working with clients through her company GoldSquare, she loves reading, traveling, and learning new things.
Adulting
Health
Adulting Healthy Living study
More From Health