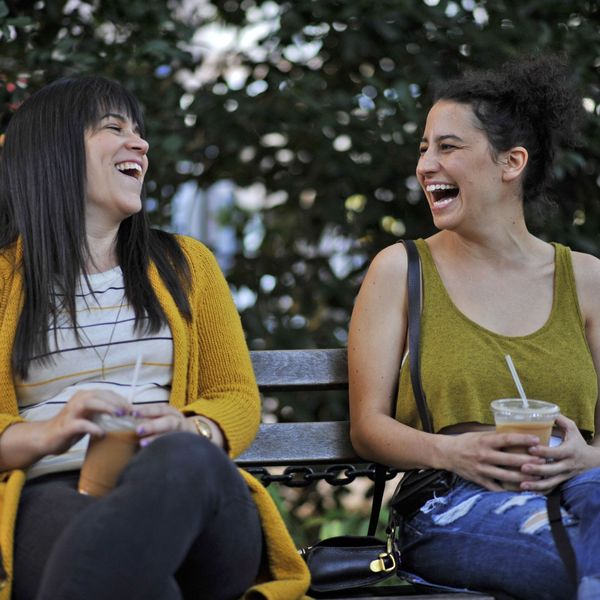 Welcome to Brit + Co's Binge-Worthy Bulletin, a series where we choose one show we're obsessed with and tell you all the reasons why. Our latest pick: Broad City, which is set to air its fifth and final season on Comedy Central starting Thursday, January 24. In tribute to its radical (for TV) depiction of young female friendship, we're listing off just some of the things that make it so special — and will ensure its spot in TV history. Click through to find out why we love this unicorn of a comedy, and why you should, too. (Photo via Cara Howe/Comedy Central)

It broke new ground. Broad City premiered on Comedy Central in 2014 after existing as an independent web series for two years prior. When it arrived on TV, it was one of the only shows of its kind on air. Created by and starring Abbi Jacobson and Ilana Glazer, the slapstick comedy centered on the friendships and NYC lives of two crude, pot-smoking, entry-level-job-having besties who were obviously feminist but never depicted as obvious heroes. The pair were — and remain — an exciting possibility for how women could create and be portrayed on TV. (Photo via Jon Pack/Comedy Central)

It's so realistic, it's scary. Raise your hand if you've ever stressed about rent, been weirded out by your roommate's boyfriend (we love you, Bevers), lived in a cramped apartment that was all you could afford, worked a dead-end job to make ends meet, gotten too inebriated at an inopportune time, spent your one precious day off just wandering around with your bestie spending money you don't have, dated someone you absolutely knew was a bad idea, been disgusting, been lazy, felt motivated, tried your best and failed, or better yet, succeeded — the list goes on. Broad City doesn't glamorize 20-something life in the city. But it also doesn't position Abbi or Ilana as struggling. It's simply their reality for their time, their place, their age, etc. We've all been there. Some of us are still there. (Photo via Linda Kallerus/Comedy Central)

It's timely and topical. Broad City has always been a comedy first and foremost, but its characters pride themselves on being politically aware and active, and the show isn't afraid to have a point of view. That was especially true in season 4, which dealt head-on with the outcome of the 2016 election. Glazer and Jacobson dedicated an entire episode to how Trump's presidency had affected Ilana's personal life, sending her to a sex therapist after she realized the impact the stress of the political climate was having on her libido. Sly comedic references to current politics littered the entire season, and while it was obvious the material was coming from a place of legitimate concern, the show found a way to still make it funny and on brand. (Photo via Cara Howe/Comedy Central)

It holds itself accountable. As woke as Abbi and Ilana fancy themselves, they're also imperfectly political and often ill-informed, and the show makes a point of letting us know they know it. They often call each other out for their performative righteousness ("You're so anti-racist sometimes that you're actually really racist," Abbi scolded Ilana in season 3), or use old-school comedy tropes like imitating other cultures as commentary on why that's actually not okay. In some cases, the characters' actions are an indirect acknowledgment of criticism leveled against the show itself. As with many young women of their generation, Abbi and Ilana are still working on their political awareness and intersectional feminism — but the show is better, not worse, for giving them the space to figure it out. (Photo via Comedy Central)

It features some surprise (and surprisingly major!) cameos. Amy Poehler was instrumental in bringing Glazer and Jacobson's indie web series over to Comedy Central (she has an executive producer credit on the show), but she's far from the only star in their orbit over the past five years. Fred Armisen, Rachel Dratch, Tony Danza, Adam Levine, RuPaul, Shania Twain, Kelly Ripa, and even Hillary freaking Clinton have all appeared on the show. And that's just to name a few of the 54 (!) special guests who've showed up so far. Who knows what season 5 will have in store? (Photo via Comedy Central)

It's packed with pop culture references. For every actual cameo, there are several more pop culture references that ground the show in a specific time and place. There's Ilana's (sometimes explicit) obsession with Rihanna and her love of Lil Wayne, casual discussions about whether Jay-Z and Beyoncé are members of the Illuminati, and even a nod to the viral David After Dentist video. Judith Light had a dog named after her, too. And who could forget Abbi and Ilana's epic video tribute to Missy Elliot, Nicki Minaj, and Drake? It's the gift that keeps on giving. (Photo via Matt Peyton/Comedy Central)

Two words: Ilana's style. The ever-confident Ilana always manages to find the most random, out-there pieces and somehow make them work as a totally put-together outfit. Think body-con everything, short crops, bold accessories, and even bolder colors. May we eternally pin her lewks as outfit inspo.

It radiates warmth. Broad City may be a slapstick comedy at its core, but its leading ladies share a friendship that is so warm and so loving, it's rare not only in its genre, but in TV and films in general. Jacobson and Glazer turned their real-life bond into an intensive on-screen study of not only the beauty and complexity of female friendship, but also the silliness and fun that women have together but often don't get to showcase in media. There aren't enough portrayals of this kind of dynamic, but with any luck, Abbi and Ilana — the voices of their generation, or at least a voice of a generation — have awkwardly kicked down the door for lots more to come. (Photo via Walter Thompson/Comedy Central)