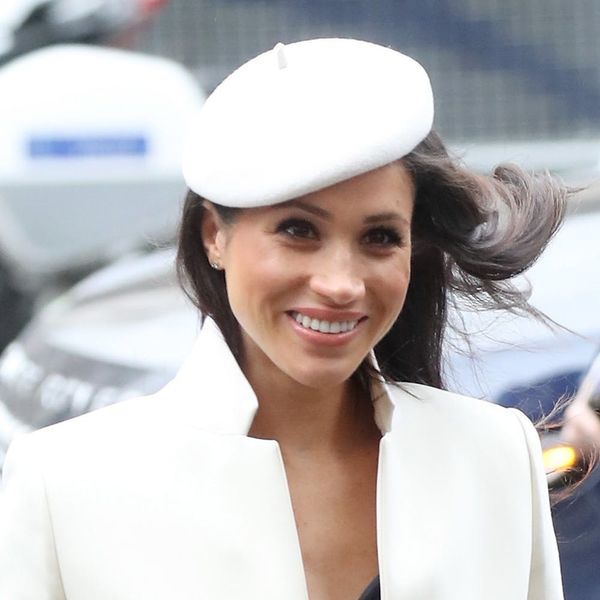 It’s a big day for Meghan Markle! Prince Harry’s fiancée has slowly but surely been immersing herself into life with the royal family: She had her first official engagement appearance with Kate Middleton last month and reportedly was baptized into the Church of England as a show of respect for Queen Elizabeth II. Now, she’s checked off one more milestone with her first-ever appearance with the Queen.

Forfor its Commonwealth Day church service at Westminster Abbey, Markle opted for a cream tailored coat (not unlike the affordable style future sister-in-law Kate Middleton recently sported) and a navy dress from British designer Amanda Wakeley (a favorite of Princess Diana), plus a beret by Stephen Jones. She finished the look off with a pair of blue pumps (oh-so similar to Markle’s) and a leather Mulberry clutch.

The Queen (who looked rather smart herself in a regal burgundy coat with a matching floral topper, a printed dress, and pearls), presides as head of the Commonwealth, an intergovernmental organization comprised of 53 member states.

The family, also joined by Princes Harry, William, and Charles, as well as the Duchess of Cornwall, Camilla, was treated to a performance from Liam Payne as well as a speech from the Queen, who noted the importance of the group. “Shared inheritances help us overcome differences so that diversity is a cause for celebration rather than division,” she said.

Kudos to Meghan for knocking this one out of the sartorial park!

What do you think of Meghan’s Royal style? Share with us over @BritandCo.

Nicole Briese
Nicole is the weekend editor for Brit + Co who loves bringing you all the latest buzz. When she's not busy typing away into the wee hours, you can usually find her canoodling with her fur babies, rooting around in a bookstore, or rocking out at a concert of some sort (Guns N' Roses forever!). Check out all her latest musings and past work at nicolebjean.com.
Celebrities
Celeb Style
Celebrities Celebrity Style hats Kate Middleton Royal Family
More From Celeb Style