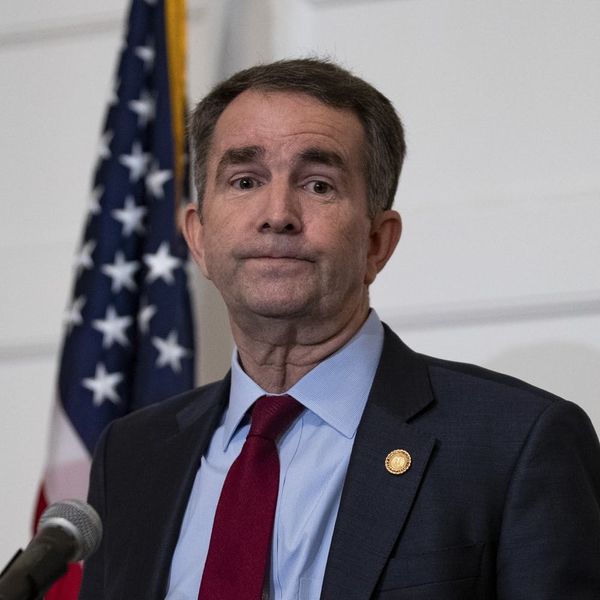 Virginians and others around the country are now demanding that Democrat Ralph Northam resign as Virginia governor over a racist 1984 yearbook photo.

A photo surfaced Friday, February 1, that featured a man in blackface and another person wearing a Ku Klux Klan hood and robe on Northam’s medical school yearbook page. The controversy was initiated by a right-wing media outlet that has also commented in bad faith on legislation on the table in Virginia that protects people who need late-term abortions.

The right-wing commentary website Big League Politics was the first to publish the four-photo spread, which was later verified by The Virginian-Pilot as being part of a half-page dedicated to Northam in the Eastern Virginia Medical School yearbook. The Washington Post reports that  Big League Politics received a tip regarding the disturbing yearbook page after Northam voiced public support of medical access to late-term abortions.

Northam initially apologized for the racist photo but later backtracked and now claims that he is not either of the people in the picture. Northam has also offered to use facial recognition technology to prove his innocence, despite the fact that one of the faces is entirely covered by a KKK hood. Though he denies that the photo on his yearbook page features him, unlike every other photo on the page, Northam admitted during a Friday press conference that he used blackface to impersonate Michael Jackson during that time period.

While a few Democrats are standing by Northam, most in the party have condemned the photo and called on Northam to resign. Over the weekend, the hashtag #ResignNortham spread through social media alongside the galling yearbook photo. To Virginians who hoped Northam would bring about criminal justice reforms that would alleviate some harms faced by the state’s Black communities, the racist photo is a betrayal and sign of incompetence for the position that can’t be overcome.

Some Virginia activists are hoping not only that Northam will resign, but that he will use his powers as governor to free people from prison before he does. Criminal justice reform activists in Virginia started a Change.org petition demanding “Northam use his remaining time in office before his resignation to grant mass clemency to as many pending cases as possible, with an emphasis on freeing incarcerated Black people.” According to the Prison Policy Initiative, 69,000 Virginians are currently behind bars, the vast majority of whom are Black people, and many are in jail before they’ve even had a trial.

Despite various calls for resignation from within his own party and the people who supported his run for governor, Northam has so far staunchly refused to publicly consider resignation. During the same press conference where he admitted to using blackface on a separate occasion from the one pictured in his yearbook, Northam announced that he would not be stepping down. However, political observers wonder if he will be able to ride out protests from his own voters and mounting condemnations from fellow Democrats.

In an ironic twist of fate, Northam’s resignation could bring about the gubernatorial takeover of current Lt. Gov. Justin Fairfax — an African American descendant of slaves who would become the only Black governor in the country. But Fairfax faces separate, late-breaking allegations of his own.

Fairfax issued a statement early Monday morning to contest sexual assault allegations made against him in a Sunday night Big League Politics post. Though Fairfax did not name the allegations or the outlet that printed them, his statement indicated that an accuser had previously brought the published claims to The Washington Post a year prior and that the paper investigated the allegations before deciding not to run the story.

The Washington Post reports having made phone calls to people “who knew Fairfax from college, law school and through political circles,” and “found no similar complaints of sexual misconduct against him. Without that, or the ability to corroborate the woman’s account — in part because she had not told anyone what happened — The Washington Post did not run a story.” The New York Times also approached the woman who leveled the charge against Fairfax, but had not yet received a response at press time.

Elizabeth King
Elizabeth King is a politics, history, and culture writer based in the Twin Cities. She is generally pretty cranky but still enjoys traveling, music from the early 2000's, and plotting the resistance. Feel free to say hi on Twitter at @ekingc or check out some of her work at www.elizabethcking.com.
Controversy
Politics
Controversy Politics