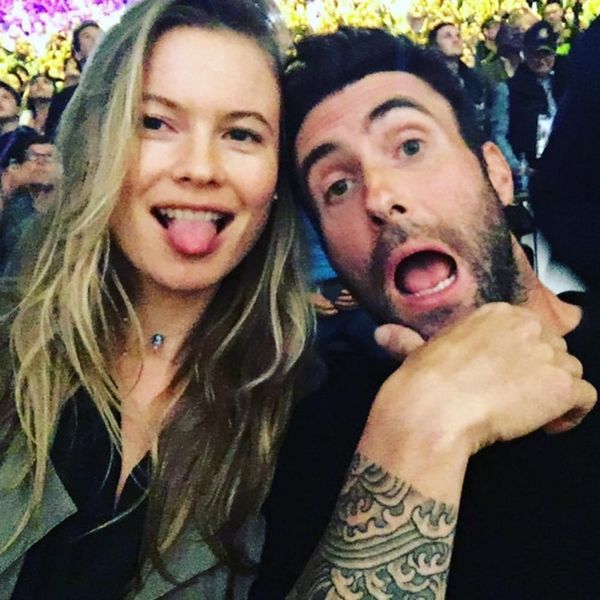 Behati Prinsloo might be proving that being preggo with your bestie is, well, the best. But hubby Adam Levine is making the rounds of press appearances and gushing that he’s “super pumped” about being a first-time dad, while also dishing out some exciting news. We may have been speculating over the gender of the new Prinsloo-Levine little one, but now Adam has revealed that his Victoria’s Secret angel wife Behati is having…

Appearing Friday on Live With Kelly and Michael, Adam let fans in on how Behati is doing, saying, “She’s good, she’s just, you know, been eating a lot of weird food.” And what does Adam consider weird? “Watermelon, that’s the thing in our house. A lot — so much watermelon.”

He admits, though, that he’s pretty lucky in that regards. “I mean, it’s delicious. I’m glad it’s not, like, pickles or some weird thing.” Adam sure does have an interesting definition of “weird” food. We have to wonder what he’d think about the current rainbow food trend (rainbow grilled cheese, anyone?).

No news yet on a possible due date or name for the expected arrival, but if Behati keeps posting adorable pics of her baby bump on Instagram, we’re sure the little one will be here before we know it.

How did you reveal your baby’s gender? Tweet us @BritandCo!

Desiree O
Desirée O is a ‘Professional Bohemian’ who loves anything and everything related to the arts, entertainment, and pop culture. She ADORES being a ‘Newsy’ for Brit + Co, covering all of the latest tidbits of awesomeness that you want to read about. When she’s not writing, she’s either making messy art, going on long adventurous walks with her camera, or poking around over at bohemianizm (http://www.bohemianizm.com/). You can find out about Desirée O and her work at http://DesireeO.com/ or follow her on Twitter @DesireeO.
Celebrity Baby
Celebrity News
Celebrity Baby Pregnancy