Barack Obama Has a Perceptive Theory About Toxic Masculinity 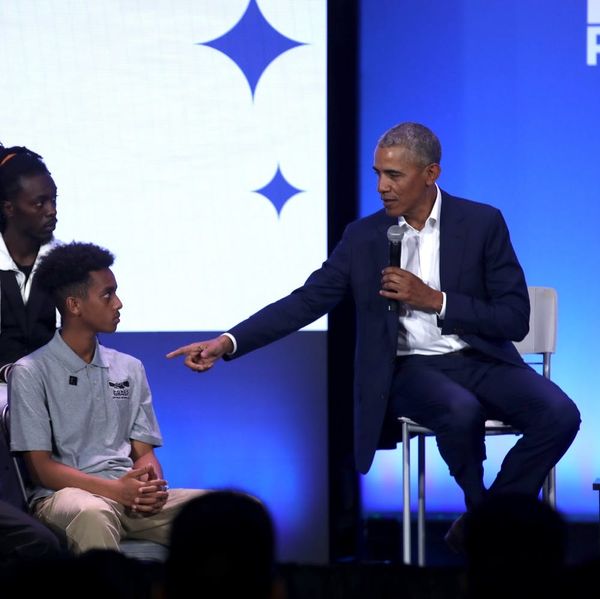 During a two-day conference in support of his My Brother’s Keeper initiative in Oakland, California, this week, former president Barack Obama explained to basketball star Steph Curry how racism and fear of inferiority have created toxic masculinity cycles that are keeping Black youth from reaching their full potential.

“All of us have to recognize that being a man is first and foremost being a good human. That means being responsible, working hard, being kind, respectful, compassionate,” the former POTUS, who introduced himself as “Michelle’s husband,” told Curry and the crowd. “The notion that somehow defining yourself as a man is dependent on, are you able to put somebody else down… able to dominate… that is an old view.”

Obama also explained the imperative of creating spaces where young men, particularly young men of color, don’t feel pressure to act in any certain way in order to gain respect from their peers. “If you’re confident about your strength, you don’t need to show me by putting somebody else down,” Obama said. “Show me by lifting somebody else up.”

He went on to explain how racist ideas of manhood — particularly racist messages that tell Black men and boys that they are less than their white peers — have pushed young men of color to compensate for their perceived lesser status by acting in overexaggerated, traditionally rough “male” ways, and how these toxic values seep into Black communities through violence and become interwoven into the cultural landscape through harmful stereotypes.

“Ironically, that shows the vulnerability you feel,” Obama said. “If you were very confident about your sexuality, you don’t have to have eight women around you twerking… you seem stressed that you gotta be acting that way.” Curry added that it’s imperative that men have spaces where they can be vulnerable and discuss their feelings without fear of being reprimanded, and he applauded his team’s locker room as one such space.

My Brother’s Keeper was founded in 2014 when then-president Obama wanted to, according to the initiative’s website, address “persistent opportunity gaps faced by boys and young men of color and ensure that all young people can reach their full potential.” Since its founding, the initiative has raised hundreds of thousands of dollars through grants, donations, and other funding.

Kat Armstrong
Kat has been a writer, social media maven and mom for longer than she's willing to admit. She's also spent time in front of and behind the camera, interviewing celebs, politicians and acting as a producer for fashion and artistic photography shoots. When she isn't writing for various orgs and publications, she's hanging with her kids, husband and French Bulldog, Peter, in Toronto, Canada.
Politics
Gender Issues
Politics
More From Gender Issues