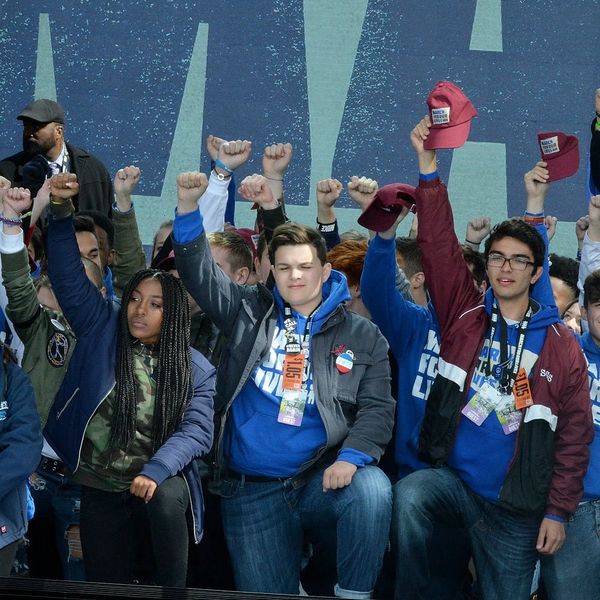 On Wednesday, just days after the March for Our Lives, a group of Black students from Marjory Stoneman Douglas High School in Parkland, Florida held a press conference to declare that their worries about the future of gun control are being overlooked both by the press and by lawmakers. If you didn’t hear about it, you’re not alone: Only an estimated eight local media outlets covered the event.

While the students who spoke at the conference did not want to take away from the work that is being done by their fellow student activists like Emma González and David Hogg, these MSD High students are asking for equal representation in the media. Around 11 percent of the Stoneman student body is Black, but the media’s coverage of the student activists has barely reflected this reality.

“The Black Lives Matter movement has been addressing the topic [of gun violence] since the murder of Trayvon Martin in 2012 and we have never seen this kind of support for our cause. We surely do not feel that the lives or voices of minorities are valued as much as those of our white counterparts,” said student activist Tyah-Amo Roberts.

The students also feel that the increased police presence at their school since the shooting could actually put Black students at greater risk, something they say is being overlooked in media coverage.

“It is estimated that one in three police officers suffer from undiagnosed post-traumatic stress disorder,” Kai Koberer explained. “When mentally ill police officers are tasked to safeguard a traumatized student body, that becomes a recipe for disaster — police need to stand on the perimeters of our school. Those chosen to work at school should receive PTSD counseling and special diversity training.”

Stats back up the student’s worries, as well. According to the Washington Post, in 2017, police across the country shot and killed 1,000 people. 19 of those people were unarmed Black men, but the others shot were believed to have been armed with either a gun or other weapon. Overall, nearly 22 percent of those killed by police were Black men, yet Black men only make up six percent of the entire population of the US, making this type of death by police disproportionately high among Black men.

Mei-Ling Ho-Shing, a student who has been working with Congressman Debbie Wasserman Schultz for an assault weapons ban added, “We are proud to say we are from Douglas; we are proud to say that those who are at the front are doing a great job, but we have so much to say too.”

Kat Armstrong
Kat has been a writer, social media maven and mom for longer than she's willing to admit. She's also spent time in front of and behind the camera, interviewing celebs, politicians and acting as a producer for fashion and artistic photography shoots. When she isn't writing for various orgs and publications, she's hanging with her kids, husband and French Bulldog, Peter, in Toronto, Canada.
Inclusivity
Current Events
Inclusivity Politics Teens
More From Current Events