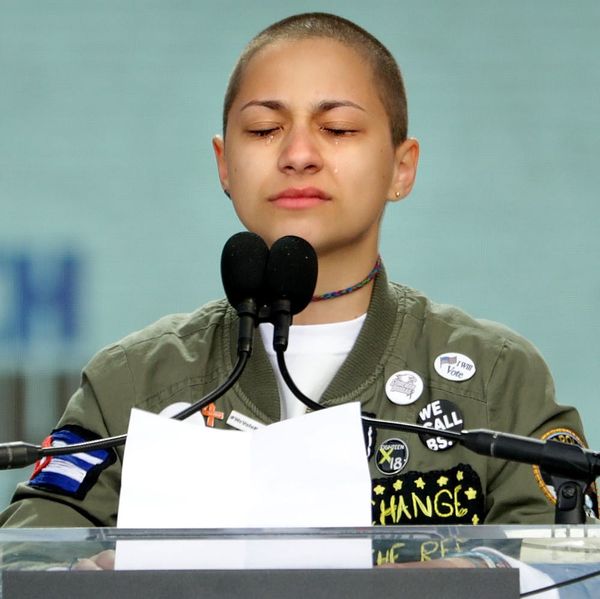 It was the silence of the decade.

Marjory Stoneman Douglas High student Emma González has emerged as the leading face of the new, youth-led anti-violence activist movement since declaring “We call BS” to lawmakers and gun advocates only three days after a shooter killed 17 people at her Parkland, Florida high school. During Saturday’s marches, pictures of González’s face, accompanied with the slogan “I stand with Emma,” emblazoned t-shirts and protest signs across the country. But it was González’s powerful speech at the Washington DC March for Our Lives, accompanied by an incredible moment of silence, that cemented the young woman’s position as the icon for a new generation of leaders.

Emma Gonzalez stayed on stage at the D.C. #MarchForOurLives rally for 6 minutes and 20 seconds – the duration of the Parkland shooting. https://t.co/B7yFTn23Nz pic.twitter.com/jdyYagtZCO

Her voice breaking with emotion, González took the microphone and proceeded to name the 17 students killed on February 14, listing along with their names the things each person would no longer be alive to do. Her despair turned to anger when she shot back at the arguments that have been made against gun control in the weeks following the tragic attack — arguments that place an emphasis on mental health intervention or “walking up” to ostracized students as better alternatives to gun control for preventing in-school violence.

“This isn’t just a mental health issue,” González shouted with frustration and grief. “He wouldn’t have harmed that many students with a knife!”

As González held her silence and wept, many of the demonstrators in attendance openly cried along with her.

Once she had finished, Gonzales addressed the crowd once more — this time, with a message to fellow teens: “Since the time that I came out here, it has been six minutes and 20 seconds. Fight for your lives before it is someone else’s job.”