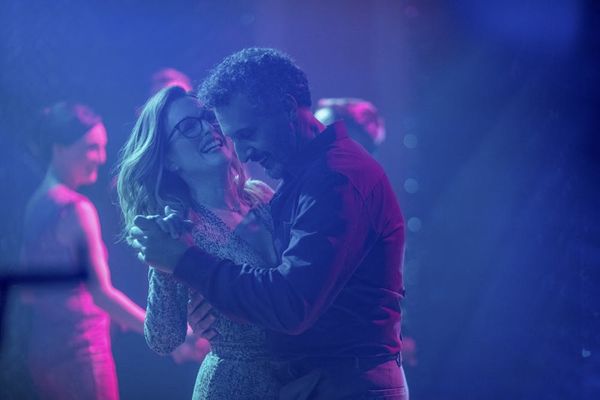 Julianne Moore’s latest performance, as the title character in Sebastian Lelio’s Gloria Bell — a remake of his Oscar-nominated 2013 Chilean film Gloria — is one of her best, most honest portrayals of a character. But it almost didn’t happen.

“I had seen the original film and was just blown away by it. I thought it was so, so beautiful, and I really wanted to meet with him,” Moore told Brit + Co at a New York press junket for the film, which follows a 50-something divorced woman as she embarks on a complicated new romance with a man she meets on one of her nights out at a singles dance club.

Fortunately for the actress, she and Lelio share a manager, who arranged for the pair to meet in Paris. Unfortunately, there was a misunderstanding over what the meeting was about, and Lelio thought Moore didn’t want to have anything to do with the movie, which of course she did. So they had a long conversation about other things, until Moore finally told him she wanted to do a remake — if and only if he directed it.

That was a few years ago. It took some time to actually get the project going, and Lelio was a little nervous when they finally did. “It was paralyzing at the beginning, to think that you can revisit your own materials and bring them back to life,” he admitted to Brit + Co. “That was a big question. But I guess the danger of it was really exciting. It was an artistic challenge to bring it back to life, and to find whatever was universal about the first story or the first version and try to find a new vehicle for that. It’s like staging a play with a new set of great actors in a different culture.”

That new set of great actors includes John Turturro, who plays Gloria’s love interest Arnold; Brad Garrett, who plays her ex-husband; Rita Wilson, who plays her best friend; and Michael Cera and Caren Pistorius, who play her kids Peter and Anne. Moore is the anchor of the film, though — she quietly owns every scene she’s in, and she’s in every scene.

“The game of the film is to observe this film from every possible angle, going through the entire emotional spectrum,” Lelio explained. “So when the woman-slash-actress that is interpreting the role changes, then the soul, the DNA of the film, is somehow modified. It’s all about Julianne and her wonderful incarnation of Gloria Bell.”

There’s nothing particularly extraordinary about Gloria as a character — she likes to dance, loves her kids, sings in the car, and is generally game for anything, including paintball and spur-of-the-moment trips to Vegas — but Moore is captivating in the role. It’s easy to see why Arnold is so utterly infatuated with Gloria, because who wouldn’t be?

That’s the magic of the film. As Arnold falls for her, so does the audience. “The thing that’s kind of miraculous about this movie is that you realize that the only people who experience Gloria in her entirety [are viewers]. Because you see her with her children, you see her with her best friends, with her mother, with her boyfriend, with her coworkers — and yet the only people who really see her holistically are people in the audience and herself,” Moore told us.

“So when you watch Gloria Bell, there’s this incredible intimacy that Sebastian has created, and it’s like watching yourself. That moment of identification that happens, it happens in that intimacy and that observation. And that’s what’s so beautiful about it. And that’s why I wanted to work with him.”