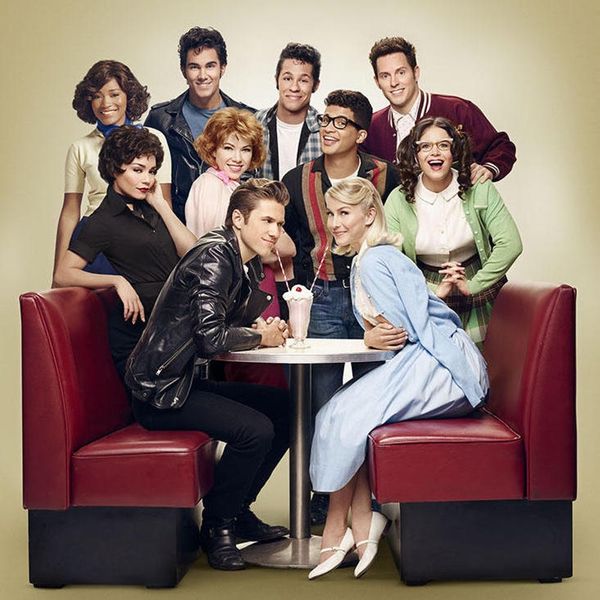 Last night, Fox aired the much anticipated Grease: Live musical with an all-star cast that included newly-engaged Julianne Hough as Sandy and Aaron Tveit as Danny. But as the show was live, you knew it couldn’t all be smooth sailing. High School Music alum Vanessa Hudgens carried out a sterling portrayal of the badass Rizzo just hours after her dad passed away. The musical was an absolute smash hit with 12.2 million viewers and even the old cast from the original 1978 movie showed their love for last night’s production in super adorable ways.

Julianne Hough, Didi, Barry & the cast! So excited to watch GREASE LIVE (@gogrease) tonight!! I know you will be… https://t.co/CEj4SqnqSi

1. Olivia Newton-John tweeted her support: The O.G. Sandra Dee herself tweeted her support to her old co-stars along with the new cast, letting them know she was tuning in and wishing them all the best. Olivia gave a special shoutout to Julianne Hough, her successor as Sandy, along with former castmates Didi Conn and Barry Pearl, who both had cameos in the show.

Grease to thank for giving him his breakout role as the dreamy Danny Zuko. Despite having a career that spans 40 years in show biz and several films under his belt, the actor gave his seal of approval to the Grease: Live cast, telling E Online on the red carpet of his new miniseries The People vs. OJ Simpson, “I don’t know if I could do that! I did it on Broadway but I don’t know if I could now do what those kids are about to do. I take my hat off to them for it.”

Barry Pearl actually had a cameo on the production:

Washington Post,”The fact that the two us should be chosen to be part of this as an homage — an overall collective homage to the piece — is just delicious. That has been the Grease experience all the way along. It’s been one magical moment after the next.”

Grease: Live as Vi, the patient waitress at the diner. Carly Rae Jepsen of “Call Me Maybe” fame starred as Frenchy in the Live production and shared the stage with her role’s predecessor, but that’s not all she shared. Didi surprised Carly with Frenchy’s original costume from the movie as well as a custom silver locket that contained a photo of the two actresses together. Carly posted a pic of the gifts on Insta along with the caption: “Dear sweet #didiconn I can’t thank you enough for your generous spirit and inspiring talent. This locket/original Frenchy shirt you left in my room had me crying those happy tears. Xoxo #FRENCHY loves for life!” How sweet!
Kimberly Wang
Kimberly Wang writes about all things pop culture, tech, style, and beauty. She's a Bay Area transplant and has an MFA in Creative Writing from Columbia University. On a sunny New York day, you can find her hanging out with her mini schnauzer Isabelle Jellybean on a blanket in Central Park.
Pop Culture