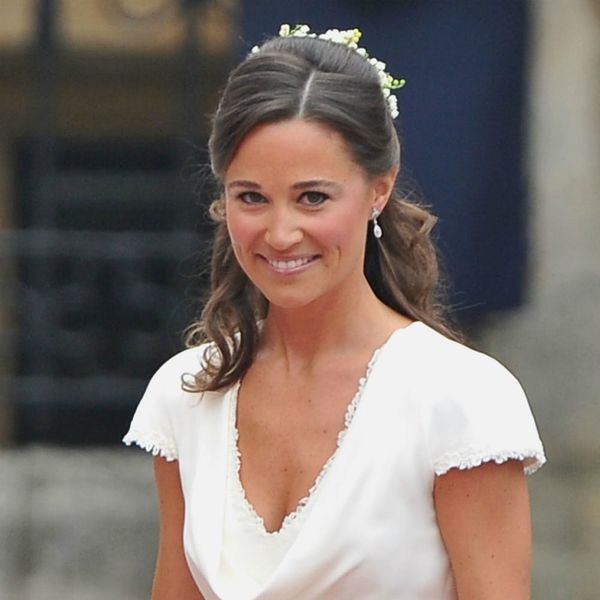 With Pippa Middleton’s Royal wedding just over a week away, everyone’s dying to know what is in store for Duchess Kate’s sis on the style front. She recently stepped out in an amazing Erdem dress with her fiancé, and now fans are chomping at the bit for info on the gown she’ll wear for her late-May wedding. With rumors swirling that guests should bring multiple outfits, it’s sure to be quite the sartorial scene, and insiders are revealing just what we may have in store for Middleton’s big day.

According to those in the know, Middleton’s dress is “simple, elegant and all handmade,” which should come as no surprise to fans of rumored designer Giles Deacon, whose work is both sleek and luxurious all at once. When asked by Hello Magazine what the dress will look like, Deacon simply replied, “I don’t address rumors,” leaving it up to our imaginations to envision what the socialite will wear down the aisle.

The fashion icon has dressed everyone from The Queen of Jordan to Lady Gaga. His couture looks are both fantastical and wearable, so whatever he may be putting on Middleton for her wedding day will definitely be a show stopper.

Whether it’s Deacon or another designer she’ll ultimately choose, they’ve reportedly had their work cut out for them dressing the 33-year-old, as a source claims she’s had to have her dress taken in five separate times due to weight loss over the last six months.

Though we still have to wait another few weeks before the big reveal, the one thing we can say for sure is that the Middleton sisters will not disappoint.

What did you wear on your wedding day? Share a pic @BritandCo!

Kat Armstrong
Kat has been a writer, social media maven and mom for longer than she's willing to admit. She's also spent time in front of and behind the camera, interviewing celebs, politicians and acting as a producer for fashion and artistic photography shoots. When she isn't writing for various orgs and publications, she's hanging with her kids, husband and French Bulldog, Peter, in Toronto, Canada.
Celebrity Style
Celeb Style
Celebrity Style Celebrity Wedding Royal Family