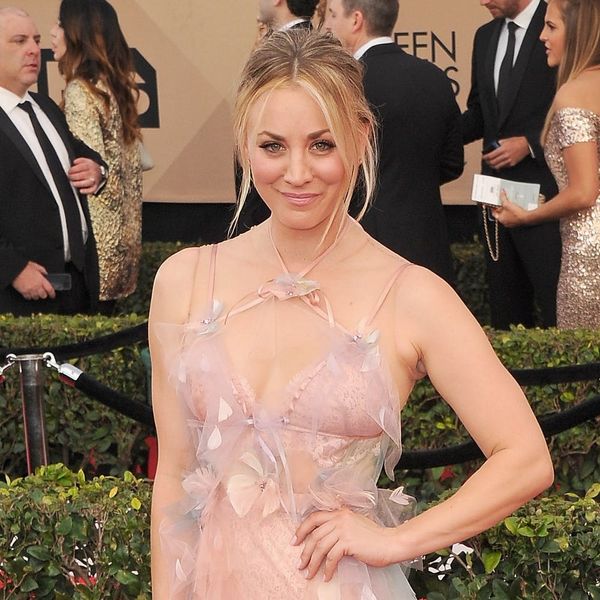 Kaley Cuoco is well aware of the engagement rumors that have been buzzing around her and bae Karl Cook. That’s why the woman who’s not afraid to take chances (pink eyebrows, anyone?) and also wants folks to learn from her mistakes (tattoo cover-ups are a serious sitch) is taking things step by step when it comes to her personal life. And though she may be taking the cautious route in her relationship, she’s still totally willing to tease fans with those engagement rumors.

Though Cuoco and Cook have proved that they’re pretty much madly in love, they’ve still only been together for a few months. On top of that, it was just at the end of 2015 that the Big Bang Theory star revealed that she was divorcing her husband of two years (who she became engaged to after only three months of dating), Ryan Sweeting.

That’s why, on top of giving no clues to wanting to walk down the aisle again any time soon, she also has a bit of a sense of humor about the entire sitch.

Look out @mrtankcook ... there's another man in my life! 👼🏼 (once again NOT my engagement ring people. PENNY IS MARRIED! 💍👄)

Posting a vid to Instagram, she teased her fella with the caption, “Look out @mrtankcook … there’s another man in my life! 👼🏼.” Eee! The baby dancing! Too cute! But Cuoco went on to tease fans who might be eyeing *that* ring on *that* finger by adding, “(once again NOT my engagement ring people. PENNY IS MARRIED! 💍👄).”

Bummer! We’ll just have to keep our fingers crossed that we’ll be spotting an IRL engagement ring on Kaley’s finger eventually. That is, whenever and if she ever opts to get married again.

Do you think Kaley Cuoco is likely to get engaged any time soon? Let us know @BritandCo!