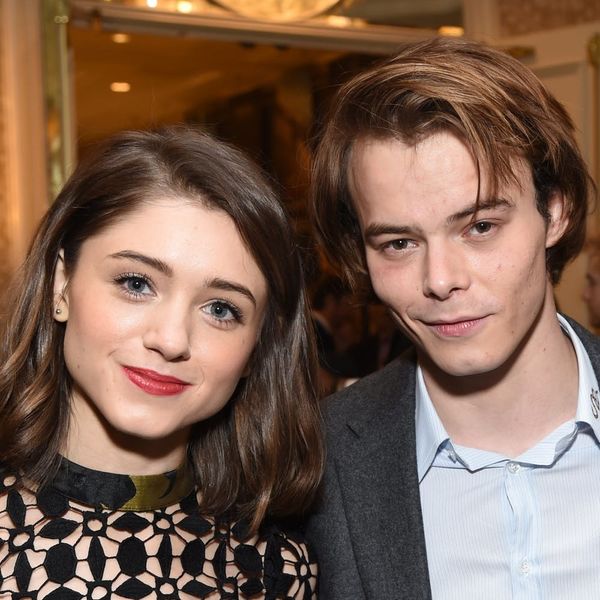 Stranger Things co-stars and onscreen lovers Charlie Heaton and Natalia Dyer have been sparking dating buzz since early March, with neither party confirming (or denying!) the news. Now, the two have tongues wagging once more after being spotted together in Paris… holding hands!

#StrangerThings co-stars and real-life couple #CharlieHeaton and #NataliaDyer were spotted on a romantic date in Paris. Click the #LinkInBio for the full gallery of photos!

It was their body language that sparked renewed chatter, however: Not only did the duo share headphones to listen to the same tunes (or perhaps even a podcast?), but the two also held hands, leaving little doubt in the minds of fans of whether or not these two are more than friends.

It was the second time the twosome had been snapped with locked limbs, with fan accounts sharing other snaps of the pair getting mighty touchy-feely on November 3.

The news also comes just over a week after the pair popped up on Heaton’s Instagram account in coordinated Wizard of Oz Halloween costumes, with the actress dressed up as a hybrid of Dorothy and the Cowardly Lion and the actor taking on the role of the scarecrow — awwww!

Confirmed or not, we must say, we’re LOVING the idea of a real-life romance between the show’s own Jonathan and Nancy (Jancy, anyone?)

Fingers crossed this turns out to be the real deal!

Are you shipping Charlie Heaton and Natalia Dyer’s on-screen and off-screen relationships? Let us know @BritandCo!

Desiree O
Desirée O is a ‘Professional Bohemian’ who loves anything and everything related to the arts, entertainment, and pop culture. She ADORES being a ‘Newsy’ for Brit + Co, covering all of the latest tidbits of awesomeness that you want to read about. When she’s not writing, she’s either making messy art, going on long adventurous walks with her camera, or poking around over at bohemianizm (http://www.bohemianizm.com/). You can find out about Desirée O and her work at http://DesireeO.com/ or follow her on Twitter @DesireeO.
Celebrities
Celebrity News
Celebrities Celebrity Couples love Netflix TV
More From Celebrity News