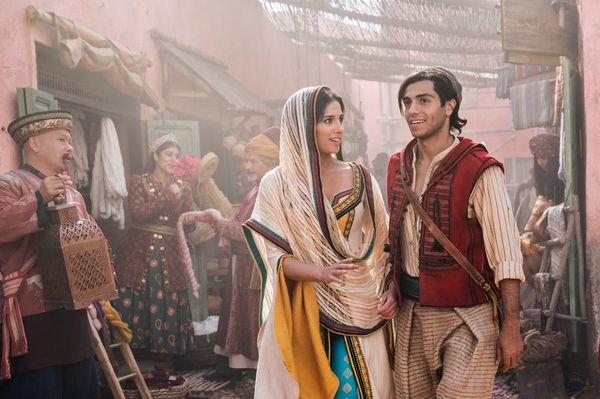 The trailer is an action-packed one, and features quick glimpses of everything from Aladdin (Mena Massoud) and Princess Jasmine (Naomi Scott) on a magic carpet ride, to Abu the Monkey, Rajah the tiger, and the film’s menacing villain Jafar — or, rather, Hot Jafar (Marwan Kenzari).

The quick clip from the Guy Ritchie-directed film also provides a better look at the relationship between Aladdin and the Genie, played, of course, by Will Smith. After Aladdin heads into the Cave of Wonders and rubs the magical lamp, Genie appears, and we immediately see the sense of humor that Smith will bring to the role.

“Oh, great one who summons me,” Smith’s Genie booms. “I stand by my oath: loyalty to wishes three.” Genie then switches from serious to silly as he deadpans, “I’m kidding, watch this!” and bursts into a fun song-and-dance routine for “Friend Like Me.” (Later, we also get to hear a snippet of the classic duet “A Whole New World.”)

Disney released its first teaser for the film during the 2019 Grammy Awards in February. At the time, viewers were perplexed by Smith’s, um, blue appearance. While some people joked that we should “cancel Aladdin” and others said Genie would haunt their nightmares, Smith seemed unfazed, simply saying on social media that he “told y’all I was gon’ be Blue!!”

Check out the full trailer below, and catch Aladdin in theaters on May 24.