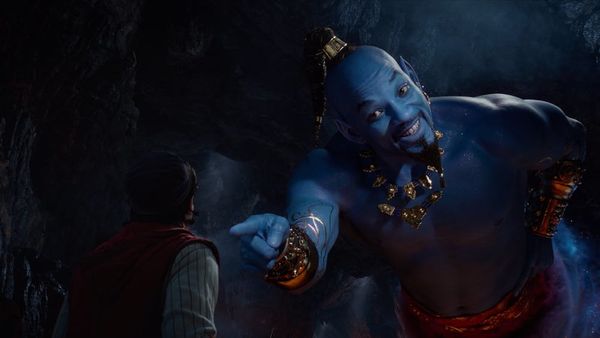 Disney dropped a new teaser for the upcoming live-action Aladdin reboot during the Grammys on Sunday, February 10, giving viewers their first look at the cast — including Will Smith’s divisive Genie — in action.

The trailer shows Aladdin, played by Mena Massoud, rubbing the magic lamp and releasing Genie, who is… very blue. “You really don’t know who I am?!” Genie asks a scared-looking Aladdin. “Genie? Wishes? Lamp? None of that ringin’ a bell?”

Previously, a Disney executive described Smith’s portrayal of the famous character, originally voiced by the late Robin Williams in the 1992 animated classic, as “part Fresh Prince, part Hitch,” and judging by the teaser, we’d say that sounds pretty accurate.

The clip also features Naomi Scott’s Princess Jasmine and Marwan Kenzari’s Jafar — AKA “Hot Jafar” — who inspired a whole other level of excitement about the film when the first look at his character was revealed last year.

Shortly after the teaser for the Guy Ritchie-directed reboot debuted during the 2019 Grammy Awards, reactions started pouring in on Twitter. Despite a previous glimpse at what Smith’s Genie would look like, viewers seemed genuinely shocked by his appearance — particularly the blue color, which was not in the earlier photo.

Some suggested we “cancel Aladdin” over the depiction, while others joked that Genie will haunt their nightmares.

Smith himself took to Instagram to jokingly issue an “I-told-you-so” to fans shocked by Genie’s appearance. “I told y’all I was gon’ be Blue!!” he wrote alongside a clip of his character. “Y’all need to trust me more often!”

What did you think of the first look at Aladdin? Let us know @BritandCo!