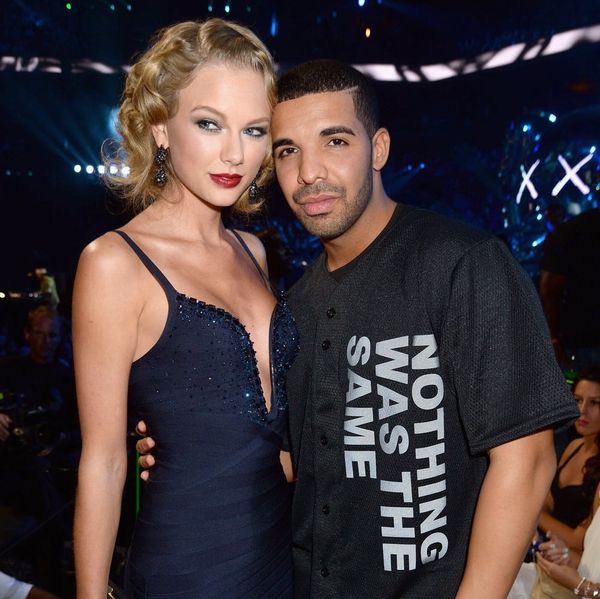 When word starting buzzing that things were heating up between Drake and Taylor Swift (with Karlie Kloss even confirming that something was going on), people started RAGING. That’s why it’s a little hard to tell if fans will be happy over this latest development or just as peeved. With new clues about the mysterious sitch, it turns out that Taylor Swift is back in the studio making music (woo!), and she’s brought Drake with her (woo?).

With things still buzzing hard around the pair, “Champagne Papi” posted a pic of himself with Taylor on Instagram with the caption, “Is that velvet?” Well, yes, it is. But more importantly… THAT’S TAYLOR SWIFT!

Though you might think this is confirmation that the two superstars are dating, a look at the pic doesn’t give us a glimpse at the duo cozying up or showing any signs of affection. In fact, they’re both hard at work in the studio.

Yep, it looks like we finally know why Taylor Swift and Drake have been getting so friendly and spending so much time together. They’re collaborating on new music. An insider told E!, “The music they have been working on is different… very catchy.” And not only that, “They’ve both been having a great time in the studio.”

While this squelches any hopes of a relationship between the pair (for now, at least), we can’t wait to hear the surely awesome tunes that result from this partnership.

Are you happy (or not) that Taylor Swift and Drake are making music together? Tweet us @BritandCo!

Desiree O
Desirée O is a ‘Professional Bohemian’ who loves anything and everything related to the arts, entertainment, and pop culture. She ADORES being a ‘Newsy’ for Brit + Co, covering all of the latest tidbits of awesomeness that you want to read about. When she’s not writing, she’s either making messy art, going on long adventurous walks with her camera, or poking around over at bohemianizm (http://www.bohemianizm.com/). You can find out about Desirée O and her work at http://DesireeO.com/ or follow her on Twitter @DesireeO.
Music
Music
Music Taylor Swift