Here’s How Karl Lagerfeld Wants to Dress Your Kids 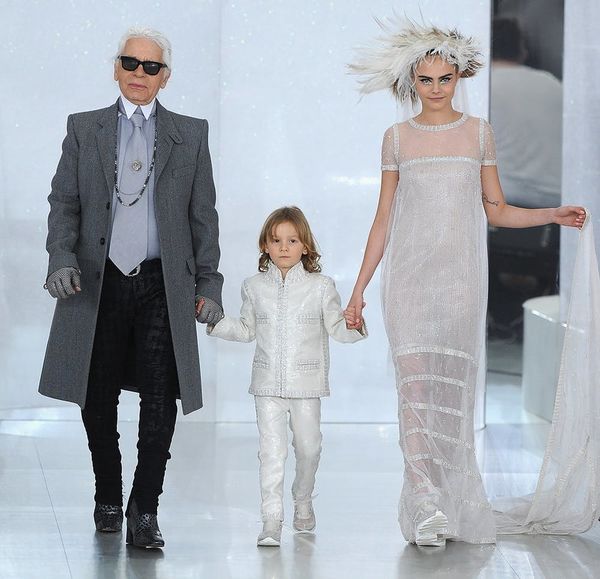 Last week we found out that Kate Spade will be launching a children’s line, and immediately we began to envision tiny polka-dot dresses, glittered tights and hilarious graphic tees. But it looks like Kate Spade isn’t the only designer taking the plunge into childrenswear. The next fashion mogul to jump on board? Karl Lagerfeld.

Considering the 81-year-old designer has no kids of his own and is known for pretty high-fashion designs, it certainly comes as a bit of a surprise that he’s venturing into baby land. However, that’s not to say we aren’t super stoked. We’re already picturing tiny suits, shiny oxfords and beautifully constructed LBDs.

The line is set to launch in Spring 2016 and will be created under Lagerfeld’s self-named label with Group CWF (Children Worldwide Fashion), who have also helped design children’s collections for Chloé, Burberry, DKNY and Marc Jacobs. WWD reports that the line will be for both boys and girls, newborn to 16 years old. Baby’s first onesie could be a Lagerfeld original. Hope those come spit-up resistant.

If you’re swooning over the idea of dressing your tike in miniature designer duds but aren’t so crazy about the prices (which haven’t been announced, but will undoubtedly be a little steep) the line will also feature a range of accessories.

If you’ll need a few years to save up for your tot’s outfit, it’s looking as though this isn’t just a one-time thing. Lagerfeld and CFW say they plan to introduce two seasonal collections each year. They’re aiming to focus on Europe, the Middle East and Korea for next year’s launch – sorry America. Oh well, a trip to Paris to pick up some baby clothes is totally justifiable, right?

What do you hope this future line will include? Share your ideas with us in the comments below.

Cortney Clift
Cortney is the senior writer and special projects editor at Brit + Co. She typically covers topics related to women's issues, politics, and lifestyle. When she's not buried behind her computer you'll find her exploring New York City or planning her next big adventure.
Designer
Fashion
Designer
More From Fashion