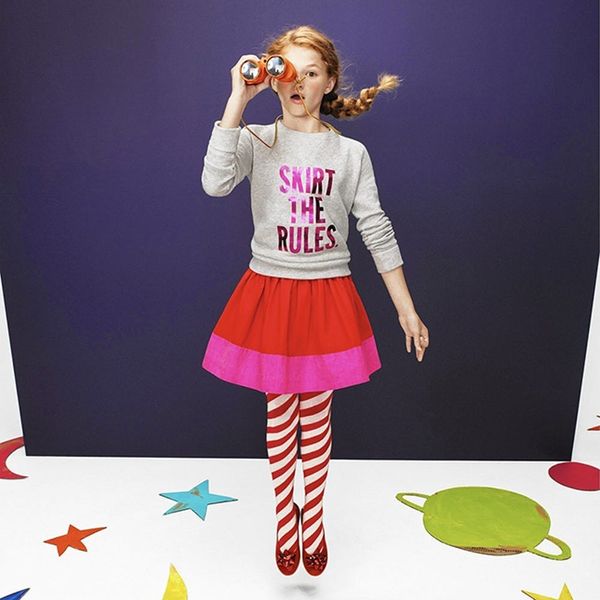 If you thought all of Kate Spade’s pieces were adorable, just wait until you see them all on your kids. After the brand recently announced that they would be closing all Kate Spade Saturday and Jack Spade brick and mortar stores, they then came back with some news of a more uplifting nature: a children’s line is coming shortly.

After a super successful holiday collaboration between Kate Spade and Gap Kids, it seems as though the company has decided to make childrenswear a permanent extension of the brand. To be honest, we’re somewhat surprised it’s taken this long. The characteristically playful designs Kate Spade is known for are definitely bound to translate well into fashion-forward kids’ apparel. One glance at the candy cane–striped tights or bow tie printed pants featured in that Gap Kids collection are really all we need to prove our point.

Not many details have been released surrounding the line, but we do know that it’s supposed to launch in the next few weeks. It has yet to be announced whether the line will be sold at Kate Spade or as its own label. We’re also not sure what the price point will be for this kid-friendly rendition of designer duds, but if they’re sticking close to the collection created with Gap Kids, they’ll retail for $20 to $130.

We’re waiting with bated breath for the undoubtedly adorable lookbook that’s sure to accompany this line’s launch, but just in case you can’t wait that long, go ahead and take a gander at these pieces from the Gap Kids + Kate Spade collab (some of which are now on sale for super cheap, BTW.)

(h/t Fashionista, images via Sand in Your Shorts)