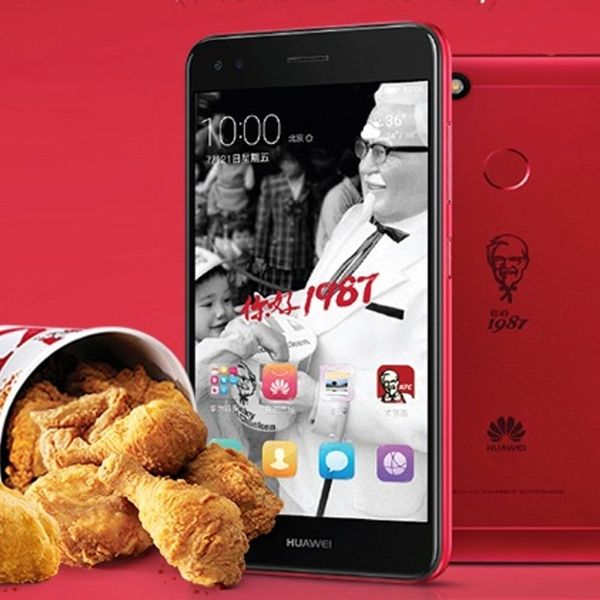 If you love fried chicken as much as you love your smartphone, then this is just what you never knew you needed. KFC (which previously released a box that would actually charge your phone) has teamed up with Chinese smartphone maker Huawei to create a KFC-branded smartphone in celebration of the restaurant’s 30th anniversary in the country. It’s finger-lickin’ good…?

A limited-edition offering (only 5,000 are available, according to Fortune), the KFC Huawei 7 Plus comes in a bright red casing and features both Colonel Sanders and the Huawei logo on the back. And while there’s a whole lotta KFC goodness on the outside, there’s even more inside.

The phone comes with a fingerprint scanner, a 3GB RAM, and 32GB ROM, and can support a 128GB Micro SD card. It also comes pre-installed with the KFC app (natch). But that’s not the coolest part! In addition to the KFC app, the phone comes with the K-Music app, which lets you choose a song and blast it via the speakers at one of KFC’s 4,000 restaurants in China.

The device costs $161 on Tmall (China’s version of Amazon) and is available this Thursday for any hardcore KFC-lover in China.

Check out this fabulously dramatic commercial that not only celebrates 30 years of KFC in China, but also shows you all of the cool things the KFC smartphone can do. Basically, if you’ve ever been enjoying a meal in KFC and thought, “We need to get a party started HERE and NOW,” this is the smart phone that’ll do the trick.

Would you (or someone you know) love to have a KFC smartphone? Tell us @BritandCo!

Desiree O
Desirée O is a ‘Professional Bohemian’ who loves anything and everything related to the arts, entertainment, and pop culture. She ADORES being a ‘Newsy’ for Brit + Co, covering all of the latest tidbits of awesomeness that you want to read about. When she’s not writing, she’s either making messy art, going on long adventurous walks with her camera, or poking around over at bohemianizm (http://www.bohemianizm.com/). You can find out about Desirée O and her work at http://DesireeO.com/ or follow her on Twitter @DesireeO.
Tech
More From Tech