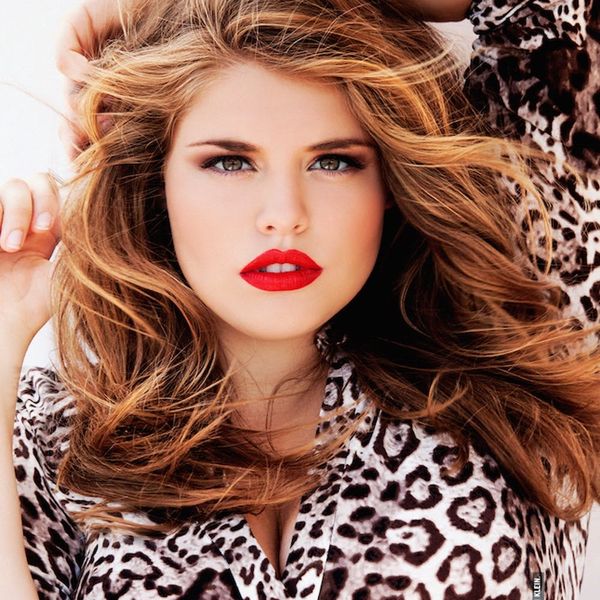 Fitness, running and living a healthy lifestyle has many faces, and Wilhelmina model Erica Jean (Schenk) proves that. The gorgeous size-18 model made headlines recently when she became the first plus-size model to be featured on the cover of Women’s Running Magazine. Since then, the young model (um, she’s only 18!) has been on TV and featured on news sites all over the Internet — and she is taking her viral fame in stride ;)

We got to speak to Erica about how her life has changed since the cover, some of her fave beauty tricks and where we can see her next.

How did you get started in modeling? Where else have we seen you before and what did you think when you snagged this cover?

I started when I was 14 when my mom sent photos from my Facebook to a few agencies in LA, and I was signed to Wilhelmina Models. You may have seen me in Seventeen magazine, online at Target.com or on my Instagram, @curve_model. I had no idea I was going to be on the cover! I found out that I was on the cover by a journalist calling me and asking for an interview!!

After your cover hit the web, you’ve been blowing up! What has the feedback been — is any of it surprising to you?

I’ve been blown away by the positive response I’ve gotten. So many women feel so inspired by the cover! I’ve been very surprised with the feedback.

What are your top fitness or health apps? Do you use any fitness tech?

I don’t use any wearable tech, but my phone has a pedometer that I love! I also like the fitness tracker that Androids come equipped with.

What are your go-to hairstyles that can go from a workout to running to catch your train in the AM? What is your beauty routine on busy mornings when you have to get out the door in 10 minutes?

I love a half braid and the rest in a ponytail. I also love a good Dutch braid, an inverted French braid. For a short morning routine, I put on my brow gel and a little Buxom mascara. If I have a little more time, I’ll throw in a nice red or orange lipstick.

What’s the last thing you made that you were really excited about?

I made a pretty fabulous gluten-free pecan pie the other day! I used gluten-free graham crackers for the crust and it was delicious! I also make my own sea salt texture hair spray. I boil water, add in a bunch of sea salt, then a little tiny bit of coconut oil or olive oil and add a scent — either a little lavender or peppermint oil!

Where will we see you next?

Maybe riding some waves in Malibu — I’ll be attending Pepperdine in the fall studying International Business Marketing and a minor in Psychology.

What do you think of Erica’s cover? Are you excited to see what else is in store for her? Tell us in the comments below!

Kimberly Wang
Kimberly Wang writes about all things pop culture, tech, style, and beauty. She's a Bay Area transplant and has an MFA in Creative Writing from Columbia University. On a sunny New York day, you can find her hanging out with her mini schnauzer Isabelle Jellybean on a blanket in Central Park.
Body Positive
Health
Body Positive interview Plus Size
More From Health