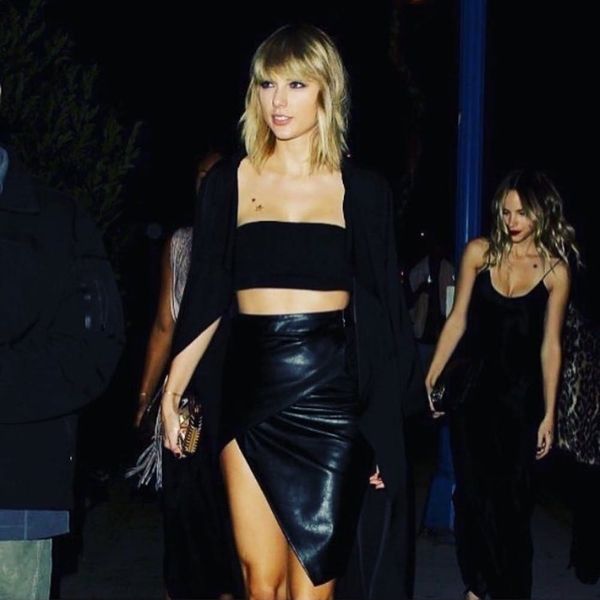 Taylor Swift may be known for breakup songs even more prominently than for her love-based tunes. While we’ve been wondering if the “Bad Blood” singer is embarking on a new love with Drake or looking to the past and getting back together with Tom Hiddleston, it looks like she’s also been returning to the music-making game by embracing her country music roots with a possible Calvin Harris breakup song.

News is buzzing today that Taylor was the lyric-writing power behind Little Big Town’s “Better Man.” The lines for the country band’s new song seriously hint at the sitch around the end of Taylor’s relationship with Calvin Harris.

“I wish it wasn’t 4am standing in the mirror / Saying to myself, you know you had to do it / I know the bravest thing I ever did was run,” the song reveals. Hmm. Sounds like it definitely could be about Taylor and Calvin.

The song goes on to say, “I know I’m probably better off on my own / Than loving a man who didn’t know what he had when he had it / And I see the permanent damage you did to me / Never again, I just wish I could forget when it was magic… But your jealousy, I can hear it now / You’re talking down to me like I’ll always be around / You push my love away like it’s some kind of loaded gun / Boy, you never thought I’d run.” Oof.

Reminiscent of Taylor’s country hit-making days, this could totally be Taylor’s roundabout way of writing about Calvin without directly releasing an obvious breakup ballad.

Take a listen to the song and decide for yourself.

Do you think that this song might be about Calvin Harris? Are you happy Taylor is working on country music again? Tweet us @BritandCo!

Desiree O
Desirée O is a ‘Professional Bohemian’ who loves anything and everything related to the arts, entertainment, and pop culture. She ADORES being a ‘Newsy’ for Brit + Co, covering all of the latest tidbits of awesomeness that you want to read about. When she’s not writing, she’s either making messy art, going on long adventurous walks with her camera, or poking around over at bohemianizm (http://www.bohemianizm.com/). You can find out about Desirée O and her work at http://DesireeO.com/ or follow her on Twitter @DesireeO.
Music
Music
Music Taylor Swift
More From Music