Meet the First (WHAT?!) Plus Size Model With a Major Contract 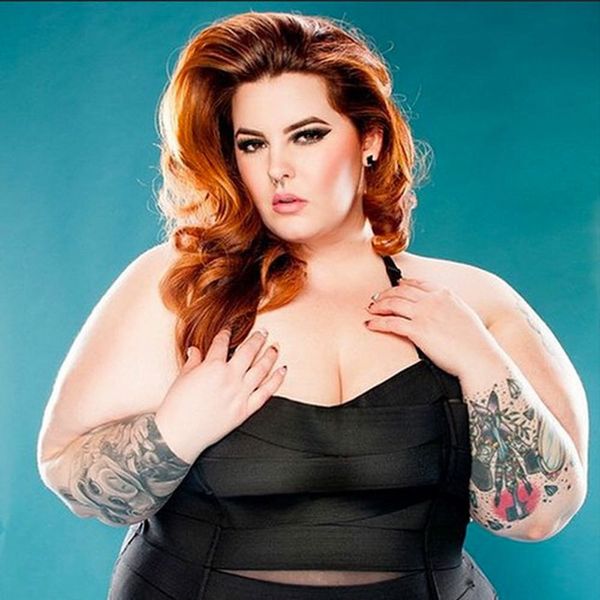 It’s been a good couple of weeks for curvy ladies. First we found out about Target launching a new (and permanent) line for plus size women and now we’re hearing news that plus size model, Tess Holliday, is the first gal of her size to be signed to a major modeling agency. World, what took you so long?

If you’re not already familiar with Tess, she’s a 29-year-old, LA-based model with a serious social media following. Tess has taken full advantage of her 19,000 followers on Twitter and 375,000 followers on Instagram, by spearheading and regularly celebrating the hashtag #effyourbeautystandards (which also have its own Instagram page). Tess often posts images of herself alongside positive messages focused around body image. Underneath a recent snap of her in lingerie she writes, “I hope this makes you realize that it’s okay to be yourself, even if you happen to exist in a fat body.”

While of course she isn’t the first plus model to be signed ever, she is the shortest to be brought on by a prominent agency – Tess is just 5’5″ and is a size 22. Anna Shillinglaw, the owner and designer of MiLK Model Management – the agency to which she was signed – told the NY Daily News, “the average plus-size agency model stands at five-feet-eight or taller and is in between a size eight to 16 U.S.”

Prior to joining the Curves section of MiLK, Tess was already doing pretty well for herself. After being turned down by other modeling agents, she posted photos of herself on the popular site, Model Mayhem. Since then she’s gone on to grace the pages of a Vogue Italia, be featured in a campaign for Benefit Cosmetics and has even worked with famed photographer, David LaChapelle.

In an inspiring caption on her Instagram Tess tells her followers, “Don’t let your size limit you on missing out on the wonders the world has for you. This has ZERO to do with health & all to do with believing in yourself!” We’ll double tap that <3

Cortney Clift
Cortney is the senior writer and special projects editor at Brit + Co. She typically covers topics related to women's issues, politics, and lifestyle. When she's not buried behind her computer you'll find her exploring New York City or planning her next big adventure.
Plus Size
Celeb Style
Plus Size
More From Celeb Style