The Fat Femme Sisters Want You to Know That “Fat” Isn’t a Dirty Word, But a Revolution 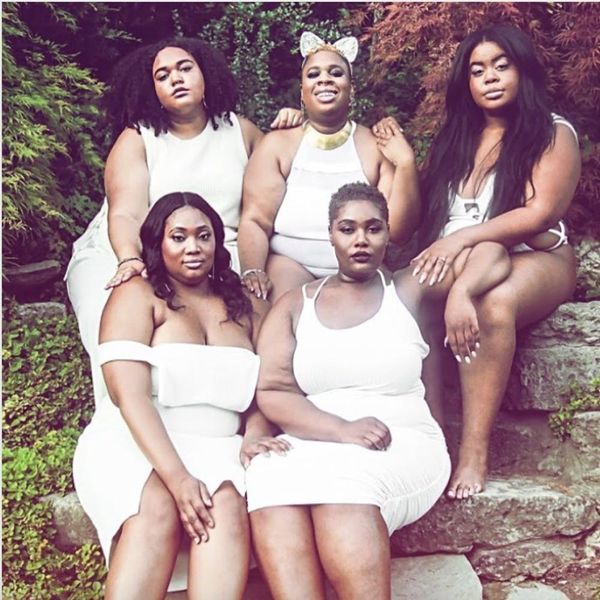 TiKA, a Canadian musician and founder of BAREGYAL, a seasonal party centered around women of color in a safer space, is tired of the lack of representation for fat, Black, and femme folks in the media and online. So in a brand new photo series that she released via Instagram at the end of September, she gathered together some of her closest friends to showcase their own diversity and beauty through a project she titled, “The Fat Femme Sisters.”

Since its release, the project has gone viral, having been re-shared across social media and written about in magazines around the world. As a result, The Fat Femme Sisters are opening up an important dialogue about intersectionality — or, recognition of the overlap of differences in race, class, gender, and ability — in the world of body positivity.

Originally developed as a music video treatment, the concept was fairly simple: Showcase the power of fat, femme Black women, while dressed in white. Photographer Anthony Gebrehiwot shot TiKa alongside independent fashion designer Sashagai Ruddock, model Jelissa Iris, model Maya Nickel, and fashion blogger Judy for the first photo series which demonstrates the strength of sisterhood. Each woman is a different shape and size, and stands happy and proud in what TiKA describes as a moment of “solidarity, togetherness, and self-love.”

“We rarely see bodies that defy what has been normalized: fat bodies, queer bodies, people of color. Our bodies are seen as a negative, our visibility sparks discomfort,” explains TiKA in an email interview with Brit +Co.

While the term “body positive” has become popular as of late, big companies and corporations don’t always represent a diverse variety of models. From Victoria’s Secret “A Body for Every Body” slogan to the Zara’s “Love Your Curves” campaign — both controversial in their own rights — there has been widespread criticism that body positivity has become non-intersectional. For the folks who fall outside the normative, having their bodies ignored by the media and ridiculed in society isn’t new.

“The media will always do the most to try and discriminate and disregard us,” TiKA shares in an email noting that for most people of color, as well as those who are fat, queer, and/or disabled, representation is still scarce. The only way to fix it, TiKA suggests, is by “dismantling the archetype of where beauty standards lie. As women of color, we have to stop asking for permission to exist and just take up space.”

Through the “The Fat Femme Sisters” series, TiKA invites her other young fat Black followers to live in the forefront and not be ashamed of who they are or how they look. Since the project launched online, hundreds of folks — mainly women of color — reached out to TiKA asking how they could become involved.

“I had a 15-year-old girl reach out to us via Instagram saying that the photo shoot inspired her to be confident in herself because each day she is bullied,” shared TiKA. While she and her fellow “sisters” were not expecting the outpouring of love, it has an enormous effect on them. TiKA says that stories like these have made them cry, and inspired them to continue producing more work in the future that will inspire fat, Black femmes.


“Women of color have grown accustomed to being abused and shamed in society from the start. I didn’t realize that my self-confidence was unknowingly encouraging others.”

Until then, she is calling on everyone else to hire, acknowledge, and pay attention to more of her fat, Black femmes: “We exist; we just need you all to pay attention!”


What inspires your own self-confidence? Talk to us @BritandCo.

Amanda Scriver
Amanda Scriver is a passionate storyteller and body image advocate based out of Toronto, Canada. When she isn't writing for various publications, she finds time to Keep Up With The Kardashians while partaking in life's greatest pleasure: the chip buffet. Don't ask her what her favorite restaurant is, it's complicated
Body Positive
Diversity
Body Positive Every Body Plus Size