‘Broccoli’ Is a Beautiful, Kinfolk-Style Magazine for Women All About Weed 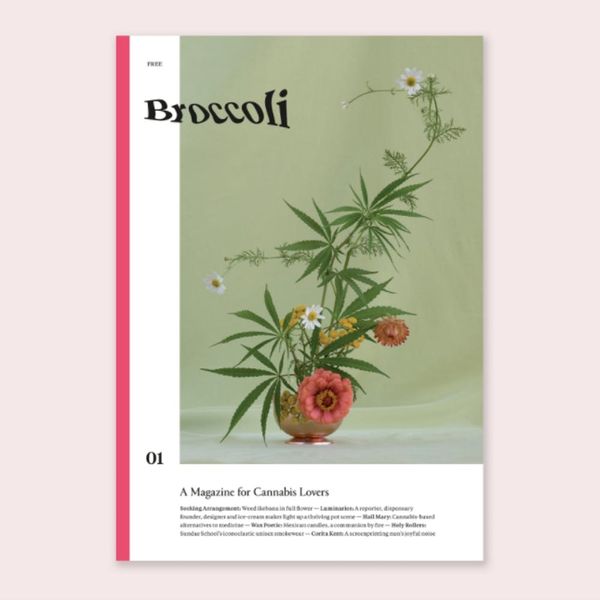 In 2015, Newsweek magazine suggested that legal marijuana could be the first billion-dollar industry not entirely dominated by men. This is largely why Anja Charbonneau decided to launch Broccoli, a new print magazine that just launched will, according to Charbonneau, “look at cannabis from an art and culture and fashion perspective,” while also being completely owned, run, and created by women.

With no professional experience in the cannabis industry besides being a cannabis user, Charbonneau spent a year quietly researching cannabis media in its various forms and became convinced that the opportunity and need for a magazine like Broccoli were real. The magazine, which aims to publish three times a year, is off to a cheeky start; its name is a nod to the slang definition for weed in parts of South America and Japan. Charbonneau says: “Broccoli is one of our favorite code words for weed.”

If Charbonneau’s name sounds familiar, it’s because she used to be the creative director of the design-forward lifestyle magazine, Kinfolk. As Editor-in-Chief at Broccoli, she’ll bring her finely honed attention to aesthetic detail to topics ranging from the future of cannabis to profiles on women in the cannabis industry, pot’s potential health benefits, and the war on drugs. In other words, it’s clear that Broccoli is not your typical stoner mag.

“I’ve been watching the unfolding of the legal cannabis industry, and I saw an opportunity to bring a beautiful and forward-thinking magazine into the scene,” Charbonneau told Brit + Co. “Women have a real opportunity to be part of the industry’s foundation, which is actually quite revolutionary. If women are able to have a voice in setting the tone from the start, we can potentially create a system that prioritizes equality.”

Charbonneau envisioned Broccoli as a print publication that would be accessible to women who were either canna-curious or already part of the cannabis industry, a space to discuss the industry in a new way. To help execute her vision, she brought along some of her former teammates from Kinfolk, including designer Jennifer James Wright and communications director Jessica Gray, to bring the first issue to life.

Each copy will be 80 pages long and offered free of charge in retail spaces like Rachel Comey and Tenoversix, or online for the cost of shipping. “By making the magazine free, we’re making it accessible to a wider audience, which in turn opens the door for more people to join the conversation about cannabis,” says Charbonneau. One thing’s for sure: Broccoli is a magazine to keep an eye on.

Will you pick up a copy of Broccoli? Tell us on Twitter.

Amanda Scriver
Amanda Scriver is a passionate storyteller and body image advocate based out of Toronto, Canada. When she isn't writing for various publications, she finds time to Keep Up With The Kardashians while partaking in life's greatest pleasure: the chip buffet. Don't ask her what her favorite restaurant is, it's complicated
Ladies First
Current Events
Ladies First
More From Current Events