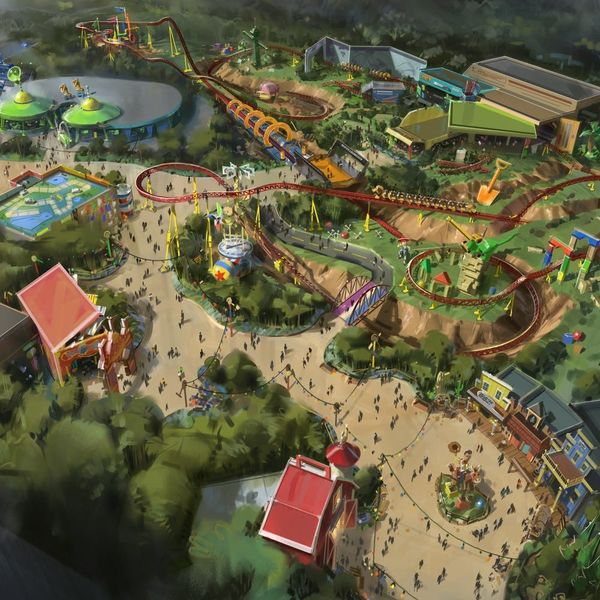 Toy Story 4 isn’t hitting theaters for another (long, sad) year, but Disney World Resort has just revealed that the beloved film’s new attraction will open this summer — and OMG, it looks amazing.

Woody, Buzz, Jessie, and Slinky Dog appeared to help announce the exciting news on Good Morning America on Friday. Inspired by Pixar’s fan-favorite films, the 11-acre addition to Disney’s Hollywood Studios will feature a twirly Alien Swirling Saucers ride, a Slinky Dog Dash rollercoaster, and an expanded version of the 4D Toy Story Mania ride. As you can imagine, all of the attractions look as bold as their on-screen counterparts, and adults are gonna love it as much as — or maybe more than — the kiddos.

The colorful new addition will be decorated with gigantic-sized replicas of Crayons, those iconic green Army men, Rubik’s Cubes, Cooties game pieces, Tinkertoys, and other goodies that fans of the movies will recognize and love.

Of course, it wouldn’t be a Disney park if there weren’t some fun food options, too: When you’re done exploring all the Toy Story Land sights and rides, you’ll be able to grab some food and drink from a new walk-up window snack bar called Woody’s Lunch Box, which will be serving familiar American fare, old-timey ice-cream soda floats, and other Toy Story-themed specialties, according to Disney.

Will you visit the Toy Story Land attraction? Let us know @BritandCo!