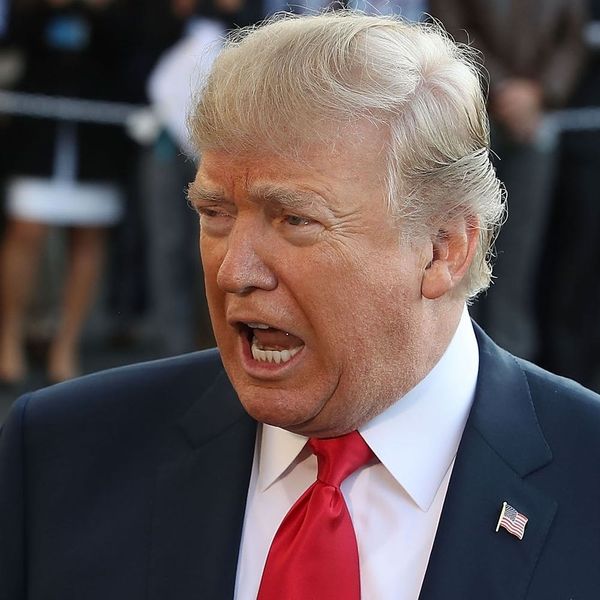 In an event that took place behind closed doors Wednesday, President Donald Trump signed the Protecting Young Victims from Sexual Abuse Act into law, effectively bolstering requirements to report sexual abuse. The law is undoubtedly a positive step in protecting minors from abuse, but critics point out that comprehending the irony of the bill’s passing — signed by a man accused of assault many times over in a White House currently embroiled in its own domestic abuse scandal — requires a feat of mental gymnastics on par with the stellar abilities of any one of Larry Nassar’s alleged victims.

It was the horrific allegations against Nassar that pushed the bill, initially introduced in 2017, to a quick approval in Congress. The former USA Gymnastics doctor stands accused of sexual assault by 156 women — many of them Olympic athletes — and was sentenced last month to up to 175 years in prison. A lengthy article in the New York Times details how the FBI, aware of accusations against Nasser, took a year to end his access to patients. During that year some 40 girls and women were molested by the doctor. The new Protecting Young Victims from Sexual Abuse Act requires that certain adults working with young athletes to report cases of child abuse, sexual or otherwise.

The bill comes as the White House scrambles to contain the scandal that swirls around the handling of abuse allegations against former staff secretary Rob Porter. Two ex-wives publicly accused Porter of domestic abuse, yet he remained at the White House for seven months after FBI agents reportedly interviewed both women. Porter never received permanent security clearance.

Even after Porter’s resignation — a widely circulated photo of one of his ex-wives with a black eye was the final nail in the coffin — Trump stood by his man.

Peoples lives are being shattered and destroyed by a mere allegation. Some are true and some are false. Some are old and some are new. There is no recovery for someone falsely accused – life and career are gone. Is there no such thing any longer as Due Process?

As The Atlantic points out, Trump is willing to stomp and shout for an accused domestic abuser’s right to due process, but took out a full newspaper ad in 1989 to accuse the (since exonerated) Central Park Five of rape.

To date, Trump has said nothing about the abuse allegedly suffered by Porter’s two wives. It should come as no huge surprise that a man who himself stands accused of sexual misconduct by 19 women should kick up a fuss for the rights of the accused while staying mum on the rights of the victims.

What do you think of the bill? Tell us @britandco.