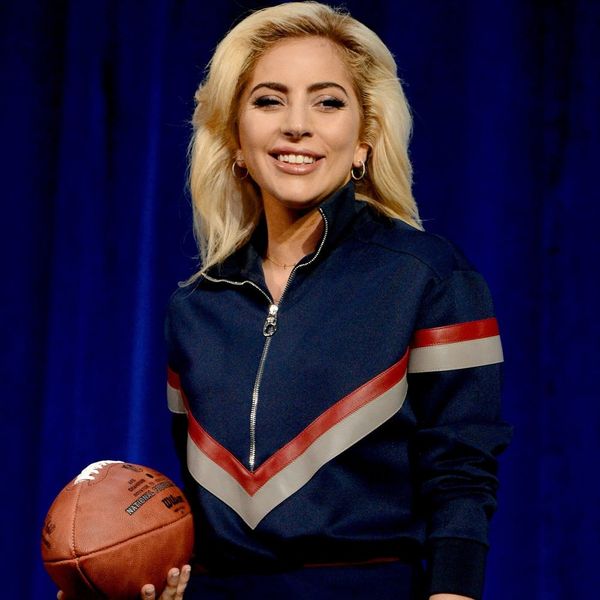 In case you missed it, Lady Gaga just absolutely SLAYED the Super Bowl halftime show (all while in her signature heels, no less!). Though she wasn’t overtly political, as many (us included) predicted she would be, she still gave folks PUH-LENTY to talk about — particularly after catching that football like a GD champ.

With what FOX quoted as 40,000 tweets per minute rolling in with the word “Gaga,” the internet had a LOT to say.

Some were blown away by her roof jump…

…and some were just happy to be alive to have witnessed it.

Ok between @ladygaga #halftime performance and beyonce's twins I think I'm gonna get through the year. #SuperBowl

Printing this pic of lady gaga out and getting my doctor to sign it because I won't be recovered in time from school tomorrow. pic.twitter.com/7mDQixR6Qa

Guys apparently there was a football game at the Lady Gaga concert.

But most? Most were impressed as hell with Gaga’s football skillz. In fact, they were so impressed, some thought she could give the Patriots a few lessons — (at least for the first half of the game!).

Who did this? 😂😩 #SuperBowl pic.twitter.com/AFbUpt5FVL

If any of the Pats need to learn how to catch the ball, ask Lady Gaga while she's there. She did better than most of you.

Who cares who wins the super bowl, we all know @ladygaga won

I still believe in TB12 but my son just said that lady Gaga can catch better than Edelman.

Lady Gaga caught a football at the end of a 30 minute gay pride concert and shattered every stereotype known to man.

Even Ellen was impressed, Tweeting her support for the show.

That was so incredible, @LadyGaga. #SuperBowl

Looks like the boys took some notes, as they rallied and came back to win it all. Perhaps, if Gaga’s ever sick of performing, she could take up with the NFL?

Killed it, Gaga. Killed it.

Were you impressed with Gaga’s football skillz? Let us know over @BritandCo.

Nicole Briese
Nicole is the weekend editor for Brit + Co who loves bringing you all the latest buzz. When she's not busy typing away into the wee hours, you can usually find her canoodling with her fur babies, rooting around in a bookstore, or rocking out at a concert of some sort (Guns N' Roses forever!). Check out all her latest musings and past work at nicolebjean.com.
Super Bowl
Celebrity News
Super Bowl twitter
More From Celebrity News