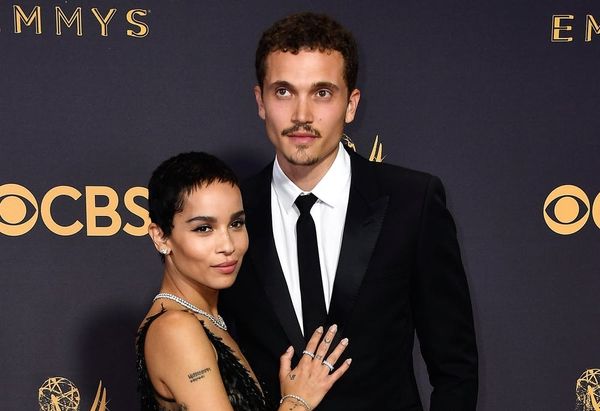 Zoë Kravitz has some good news to share! The Big Little Lies star recently revealed that she’s engaged to actor Karl Glusman — and has been since February.

“Oh yeah, I’m engaged,” Kravitz casually confirmed to Rolling Stone after an interviewer asked about her ring. “I haven’t told anyone yet — I mean, I haven’t told the world. I wanted to keep it private.”

Kravitz’s reveal came about in as low key a way as the proposal itself. “I was in sweatpants,” she recalled. “I think I was a little drunk.”

She went on to explain that Glusman had planned a much bigger proposal in Paris, but after work schedules got in the way, he decided to just go for it, even though he was so nervous she could feel his heart beating. “He nailed it,” Kravitz told Rolling Stone, adding that she can be her “weirdest self” around her fiancé. “And I love that it wasn’t this elaborate plan in Paris. It was at home, in sweatpants.”

The newlyweds-to-be have been dating since 2016. In September 2017, they celebrated their one-year anniversary with a pair of cute photos at the Emmy Awards. “Best date ever. Happy 1 year @karlglusman,” Kravitz captioned an Instagram pic of her and Glusman getting cozy on the red carpet. “I’m crazy about you, kid.”

Glusman also marked the occasion on Instagram, posting a pic of Kravitz kissing him on the cheek as they sat in their seats. “1 YEAR STRONG,” he wrote.

So far, Kravitz has not revealed any wedding plans, but we wouldn’t be surprised if she does something low-key and private. Congrats to the happy couple!

Are you surprised to learn that Zoë Krativz is engaged? Let us know @BritandCo!