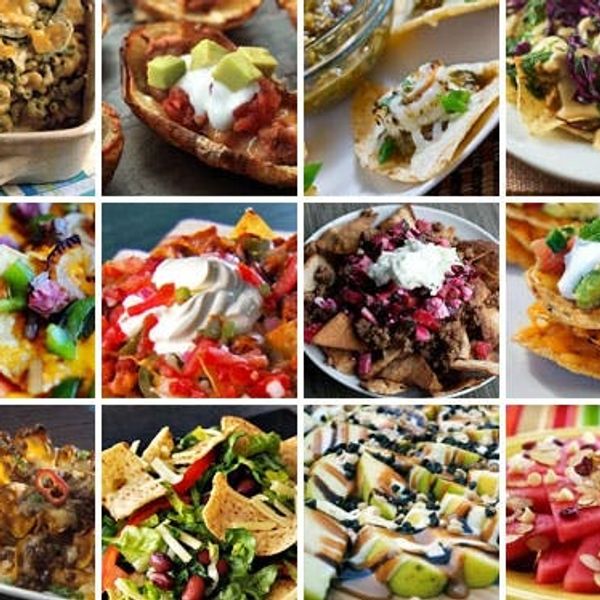 1. Nacho Macaroni and Cheese: Let's say we combine the two cheesiest snacks around into a superfood? Yeah, we thought so. Replacing your typical bread crumbs with crumbled up corn chips is a genius move, and cilantro and salsa verde go just swimmingly with a few cups of sharp cheddar cheese. (Recipe and photo: Bon Appetit)

2. Loaded Nachos Potato Skins: Another ingenious combo dish, these potato skins are fully loaded and fit perfectly in with our love for self-contained appetizers. We recommend whipping a dollop or two of horseradish in with your sour cream. (Recipe and photo: CHOW)

3. Shrimp Nachos: A rather bite size dose of nacho-vation (nachos + innovation?), these shrimp nachos are sort of a shrimp meets nacho meets crostini situation, and manage to make nachos look classy. Pro tip from the recipe: If you don't have the time or means to make fresh tomatillo salsa, simply buy a jar of salsa verde and simmer it a bit to reduce the water. Then add fresh avocado and you're golden. (Recipe and photo: Closet Cooking)

4. Nachos With Cabbage, Beans, and Cilantro Sauce: How 'bout a full dose of veggies with that plate of nachos? These nachos do the trick, from cilantro to poblano peppers to sweet onion to red cabbage, and they are seriously tasty. (Recipe and Photo: The Crisper Whisperer on Serious Eats)

5. Beef Fajita Nachos: These will definitely class up your next football gathering. Be warned, they call for a 24-36 hour marinade for the flank steak, but it is definitely worth it and super simple. (Recipe and photo: The Pioneer Woman)

6. Chicken Chili Nachos: Nachos are a great base for repurposing odds and ends found in your fridge, even leftovers. In this rendition of nachos, chicken chili is used over tortilla chips with peppers and a combination of cheeses. Layering is key for this, and could definitely work with similar stews and chilis you've got kickin' around your fridge this winter. (Recipe and photo: Martha Stewart Living)

7. Greek Nachos: We love this Greek take on a familiar football snack. In this version of nachos, tortilla chips are replaced by pita chips, ground beef replaced by Greek-flavored lamb, tzatziki in place of sour cream, topped with a beet-based Greek salsa. Opa, indeed! (Recipe and photo: Elly Says Opa!)

8. Thief-Proof Nacho Towers with Avocado and Mint: We've all been there. You were on the phone in the other room when the nachos came out of the oven, and now you're left with a few strands of cheese and a lot of beans. That elusive top cheese layer often escapes us… until now (!) thanks to these adorable nacho towers! (Recipe and photo: Scrumptious)

9. Sweet Potato Nachos: We love a lil somethin' sweet with our savory. Two tips with this one: If deep-frying isn't your scene, bake your sweet potato slices instead, or buy pre-made sweet potato chips at the store. Another option could be a twist on our sweet potato latke as your nacho base. And second, if you want to skip the ground beef, we suggest cooking lentils in a similar style instead. (Recipe and photo: Big Daddy's House)

10. Corn Chips Salad: A healthier take on nachos, this taco salad meets deconstructed nacho plate is a great alternative to the creamy, cheesy, meaty offerings more typical on game day. This same sort of thing could work really nicely in lettuce cups or wraps for an even healthier twist! (Recipe and photo: Fuss Free Cooking)

11. Apple Nachos: For dessert, whip up a round of apple nachos! This recipe uses marshmallows, caramels, peanuts, and semi-sweet chocolate morsels, but you should definitely feel free to improvise. We think a batch with toffee (or broken up Heath bar) and white chocolate chips would be utterly delicious. (Recipe and photo: Shugary Sweets)

12. Watermelon Nachos: Not exactly the season for it, but another sweet alternative (and healthier one) is a batch of these refreshing watermelon nachos topped with Greek yogurt, Craisins, cinnamon, almonds, and white chocolate chips. (Recipe and photo: Culinary.net)

What are your favorite foods for football season? Leave us a comment below or find us on Twitter!

Anjelika Temple
As Co-Founder and Chief Creative Officer of Brit + Co, Anjelika Temple brings her voracious consumption of all things creative and colorful to DIY projects, geeky gadgetry finds and more. When she's not DIY-ing her heart out, you'll find her throwing dinner parties with friends or adventuring with her husband David, their daughters Anokhi and Indira, and their silly dog Turkey.
Recipes
The Conversation
More From Recipes