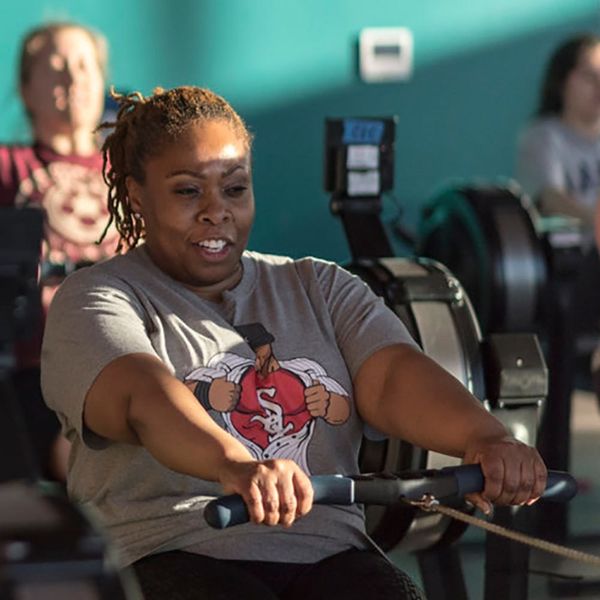 Athleta’s inspiring Power of She campaign has already introduced us to an impressive lineup of strong women finding their most amazing selves through sports and physical activity. Among others, we’ve met the world’s oldest yoga teacher, a support system and yoga group for children with Down syndrome and their parents, a community of runners raising funds and awareness for maternal care worldwide, and free diver and ocean conservationist Hanli Prinsloo (who partnered with the athleisure brand for its summer 2017 campaign) — each a stunningly powerful woman whose ability to use movement for the greater good has done nothing short of blowing us away. In honor of Breast Cancer Awareness Month, Athleta has put a new spin on the Power of She theme by supporting and shining a spotlight on an organization dedicated to empowering breast cancer patients and survivors.

Founded in 2007, Recovery on Water (ROW) is a Chicago-based rowing team that offers sisterhood and intensive exercise to women affected by breast cancer. Given the physical toll caused by cancer treatments and their complications, it’s critical that patients — and former patients — remain active over the course of their battle and recovery, and ROW gives them an opportunity to do just that. The organization’s goal, according to its website, is to “increase exercise consistency in people diagnosed with breast cancer and to improve their quality of life.”

ROW’s emphasis on physical activity as key to recovery made it a great match for the Power of She program. The October campaign is slightly different than previous iterations, however, in that it focuses on a specific health issue — namely, breast cancer — and profiles its survivors.

“I’m really proud of the fact that we are telling this story of such an inspirational group of women who have survived cancer not just in body, but have gone on to now have this incredible shared camaraderie and experience together,” says Sheila Shekar, director of brand marketing for Athleta.

ROW offers free rowing programs for breast cancer patients and survivors both indoors and on the Chicago River. According to stats on the ROW website, participants were able to up their workout frequency by about 50 percent after joining the rowing team, and they were also able to engage in longer, more intense exercise sessions over time. These benefits are hugely beneficial to women at all stages of treatment, recovery, and remission.

“Bringing awareness to research that shows that exercise can reduce cancer recurrence is an important part of our mission,” says ROW’s executive director Jenn Junk. “Whether they ever get in a boat with us or not, every patient and survivor of breast cancer should learn that exercise can be a tool for them to keep cancer at bay.”

The Power of She campaign is an important part of raising that awareness. According to Junk, ROW’s team spent more than 12 hours together capturing the program’s story for Athleta, giving the women a unique opportunity to bond outside of their usual rowing practices and to celebrate their strength.

“I was pleased to see them recognize and own their awesome,” Junk says of what it was like to watch the rowers participate in the campaign’s video shoot. “Yes, these cameras are here for you, because your story is amazing and what you do every week together is truly incredible.”

Shekar also had the chance to spend a few days in Chicago with ROW as her team prepared to share the story of Junk’s team on the Power of She site. “I was just blown away by their positivity, by their camaraderie, by their strength, and who they are individually, as well as a collective,” she says of the rowers.

With Athleta’s help, ROW will have a larger platform to spread awareness of the importance of physical activity for cancer patients in October and beyond.

“Patients and survivors across the country will have the chance to learn about and learn from these warriors, these ROW-ers, these strong, incredible women,” Junk says. “There is life after cancer. You can survive this horrible disease, and you can be strong again.”

Athleta is also observing Breast Cancer Awareness Month with a limited edition Pink Power of She Bra ($54) and the debut of the Empower Bra ($54), which is designed specifically for women who have undergone a mastectomy as part of their cancer treatment.

How does this campaign inspire you? Tweet us @BritandCo!

(Video via Athleta; featured photo via Recovery on Water)

Alli Hoff Kosik
Alli Hoff Kosik is a freelance writer who is passionate about reading, running, rainbow sprinkles, her lipstick collection, watching embarrassing reality TV, and drinking pink wine. She lives in Brooklyn with her husband and (in her dreams, at least) three golden retriever puppies. Listen to her talk books on The SSR Podcast.
Fitness
Health
Fitness Healthy Living Womens Health