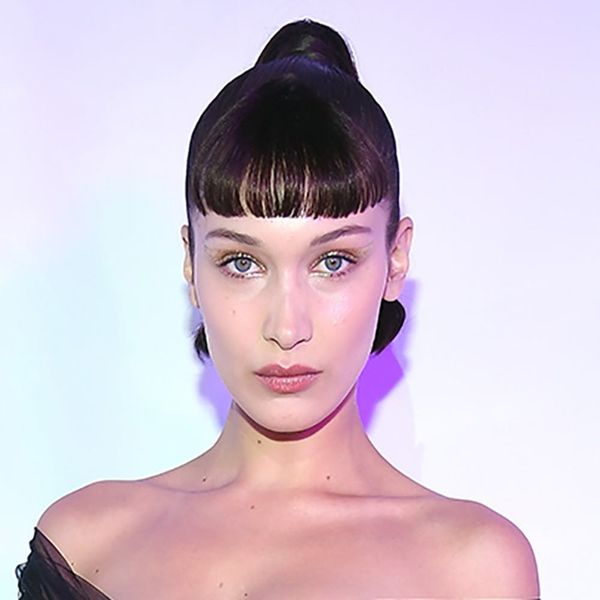 The vintage look of above-the-eyebrow baby bangs is a bold one. Unlike their longer, wispier counterparts, this abbreviated version of face fringe makes a *big* impact on your look. Short bangs are having a moment though, thanks to celebs like Emma Watson and Bella Hadid recently bringing them back into the spotlight. Read on for seven celebs we can thank for making this style trendy again.

1. Emma Roberts: Straight and crisp, Roberts’ blonde bangs almost felt like an accessory on the red carpet last month. They added a ton of style to her look without being distracting. (Photo via Axelle/Bauer-Griffin/Getty)

2. Emma Watson: Baby bangs don’t have to be blunt — just ask Watson. The unkempt tips kept her ‘do feeling trendy and casual, and juxtaposed the clean vibe of her black outfit. (Photo via George Pimentel/Getty)

4. Bella Hadid: Hadid’s glossy, clean-cut coif proved to be both daring and classic. Her linear cut gave off a retro feel while her hairstyle’s height added a modern twist. (Photo via Pascal Le Segretain/Getty)

5. Alison Sudol: This soft, feathered bang is a subtle way to approach this trend if you want to ease into it. Sudol’s light, fresh bangs frame her eye area nicely without appearing heavy or overly uniform. (Photo via Dan MacMedan/Getty)

6. Vanessa Hudgens: Channel Hudgens by opting for a slightly curved cut. Her imperfect style gives her hair a ‘90s vibe with a 2018 spin. (Photo via Steve Granitz/Getty)

7. Kate Hudson: Have a piecey pixie like Hudson? Short, texturized bangs will frame your face and add style to your close-cropped strands. (Photo via Steve Granitz/Getty)