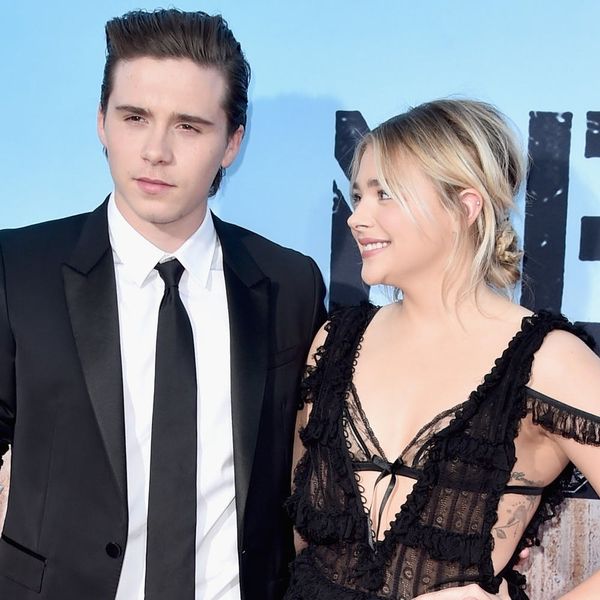 Brooklyn Beckham and Chloë Grace Moretz singlehandedly renewed our faith in love last September when they reunited after spending a year apart. Now, it seems they may have gone their separate ways once more, however, as the photography student has just been photographed sharing a smooch with a young lady that most definitely wasn’t Moretz.

In photos obtained by Us Weekly, Posh Spice’s son can be seen planting one on Playboy model Lexi Wood at Hideaway at Suite X, where the tattoo fanatic was reportedly spotted getting some fresh ink of a pinup girl on his arm from renowned celebrity artist Dr. Woo.

The pics came as a shock to fans, who were unaware that Beckham and Moretz were no longer an item.

“My Valentine,” Beckham captured a snap with his on-again, off-again beau circa Valentine’s Day.

While it’s possible the kiss was for a role or some kind of gag, given these two’s history of breaking up only to get back together, we wouldn’t be shocked if it was the real deal.

Moretz opened up about the personal struggles she endured during their last split, telling The Daily Telegraph, “I went through a hard year, and I’m not going to hide that… I felt like things were falling apart, like my head and my heart weren’t in the same place.”

Fingers crossed things are easier for them both this time around.

Do you think Brooklyn and Chloë are meant to be? Tell us over @BritandCo.

Nicole Briese
Nicole is the weekend editor for Brit + Co who loves bringing you all the latest buzz. When she's not busy typing away into the wee hours, you can usually find her canoodling with her fur babies, rooting around in a bookstore, or rocking out at a concert of some sort (Guns N' Roses forever!). Check out all her latest musings and past work at nicolebjean.com.
Celebrities
Celebrity News
Celebrities Celebrity Breakups Celebrity Couples Love