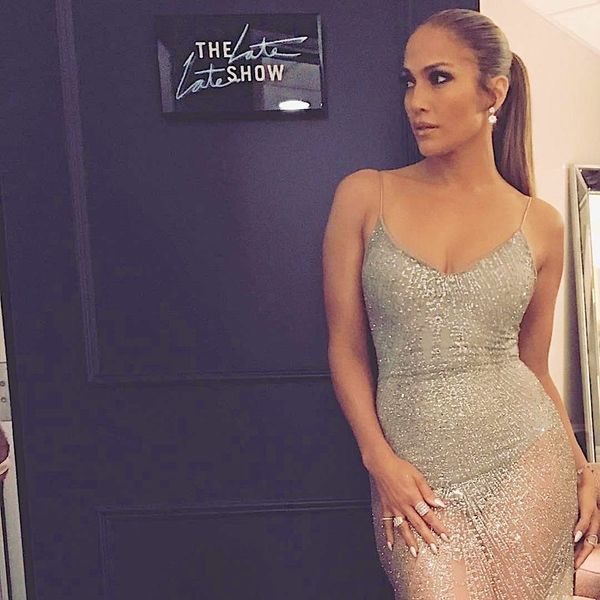 When it comes to celeb style, you may think you need stylists, a glam team, and designer duds to achieve the look, but that’s not always the case. Sometimes even A-listers love a good deal, and you just *might* spot them in something that’s (gasp!) actually attainable. Harper’s Bazaar showed us a number of celeb-approved items you can buy right now without breaking the bank, including the three below.

1. Jennifer Lopez: J. Lo, the OG naked dress queen (take note Kendall and Kylie Jenner!), taped an episode of The Late Late Show last week in a sparkly dress that was pretty affordable. The Shades of Blue actress dodged questions from host James Corbin about her budding romance with Alex Rodriguez while clad in a Meshki Aviana Jeweled Midi Dress ($111) that was completely sheer from the waist down.

2. Victoria Justice: In another moment of, “Stars, they’re just like us,” Disney alum Victoria Justice showed up at a Harper’s Bazaar event in this sparkly, on-trend Sharlie Sequin Slip Dress ($62) from Pretty Little Thing. While the silver version of her look is currently sold out, there’s a gorg mermaid green and a rose gold version that are both still available.

3. Bella Hadid: Just in time for summer, you can recreate Bella Hadid’s artsy staring-off-into-the-distance pose on Instagram in By the Sea Swimwear’s Solana One Piece ($150). The suit comes in black, coral, royal blue, slate, or a diamond print option, in addition to Hadid’s chosen rose-colored hue for your next beach vacay.

Don’t you love it when celebrities’ looks don’t break the bank? Which look are you eyeing? Tweet us @BritandCo.