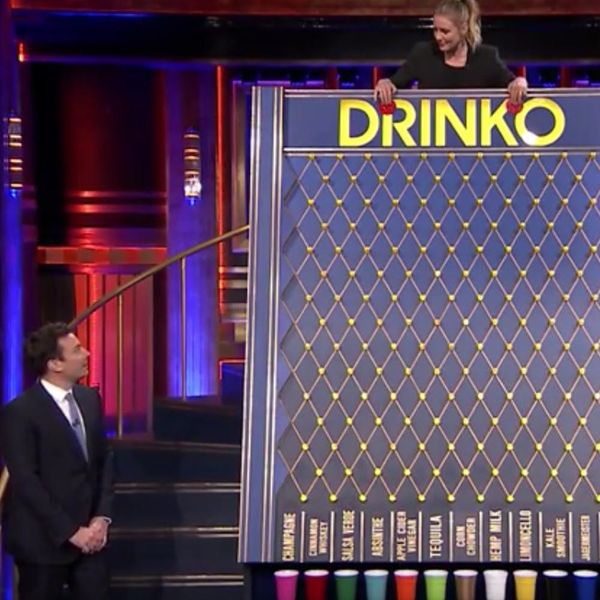 Cameron Diaz is well known for her quirky sense of humor and Jimmy Fallon is, well, Jimmy Fallon. That’s why it was so amazingly funny (and gag-worthy when it came to Jimmy’s reaction) when the two went head-to-head in a game of Drinko. Yup, DRINKO!

If you’re a fan of The Price is Right (and who isn’t?!) then you’ll know how wildly, over-the-top, yet totally justifiably excited everyone gets when Plinko is pulled onto the stage. If you’re familiar with the game, you’ll know that lucky contestants climb a few stairs and position themselves at the top of the playing surface. Dropping down disks, they end up with whatever prize is at the bottom. Unfortunately for Cameron and Jimmy, Drinko isn’t giving away cash or cars, it’s giving them a disgusting dose of a duo of drinks.

Tequila and Jägermeister are options, but so are a kale shake and salsa verde. Each on their own is fine and tasty, but the pair had to pop them into one cup and down it on live television. So one might get a mighty mix of limoncello and absinthe or perhaps a tasty treat of cinnamon whiskey and corn chowder. *shudder*

One of them TOTALLY rocked it. The other TOTALLY did not. And one of them had to go twice. Ouch. Check out the video to find out which one won and which one had to leave the stage to…ew. On the plus side, Cam and Jimmy have such amazing onscreen chemistry we kiiiiinda want to give them their own show.

Could you handle the Drinko challenge? Tweet us @britandco!