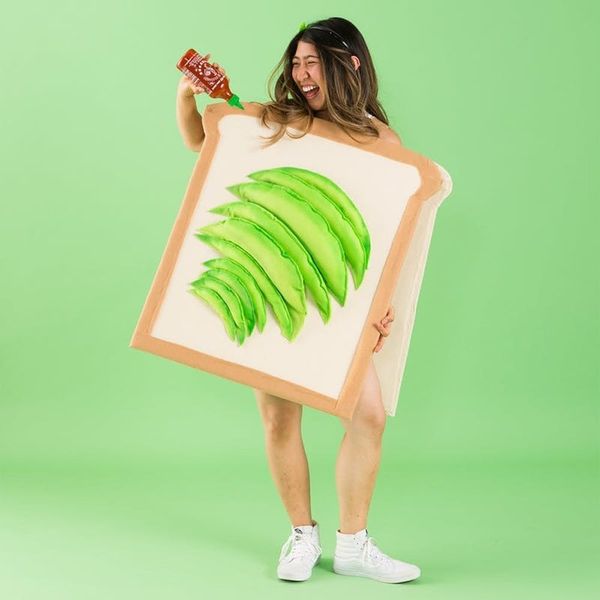 Ladies, if your Halloween costume planning has not yet begun… it’s time to get. On. It. You’ve already bookmarked all the recipes, pumpkin carving, and decor, so now we need to slay the dress-up game. Scroll on to see 75 of the most creative women’s costume ideas to buy or DIY.

Diana Prince does it all: She’s a peaceful diplomat and a raging warrior. In the 2017 movie starring Gal Gadot, they revamped her retro outfit into a fiercely sexy yet strong ensemble that enhances her inner strength. (via Brit + Co)

The silver-haired queen on Game of Thrones continues onward, never veering from her path toward glory as the ruler of the seven kingdoms. Talk about making a #lifegoal and sticking to it. (via Brit + Co)

: From season three’s “Game Over” episode where Abbi competes in the Soulstice Games and Ilana loses her job at Deals! Deals! Deals!, this costume pairing just might be two of the show’s most iconic looks. (via Brit + Co)

You’ll never believe it, but the secret behind this costume is Tupperware containers! (via Brit + Co)

Pair leather leggings or pants with an off-the-shoulder black top and a thick black belt. Red shoes are a must. Take the outfit even further with big gold hoops and sparkly red nails. (via Brit + Co)

Sushi has never looked cuter than this DIY winner. Grab a fish-shaped pillow and faux-seaweed fabric, and complete the ensemble with a ginger and wasabi headband. (via Brit + Co)

A green outfit, creatively placed spines, and a desert-inspired flower make for a prickly look of the summer’s favorite succulent. Prick-or-Treat! (via Brit + Co)

You can pretend-salsa the night away in this emoji dancer costume. (via Brit + Co)

This Disney princess outfit from Beauty and the Beast can be pieced together from items you already own. (via Brit + Co)

There are so many different interpretations, but we absolutely love this woodland-flower-nymph-type fairy. (via Brit + Co)

Everyone loooooves it because, TBH, whats not to love about avos and bread? (via Brit + Co)

“I’m selfish, impatient, and a little insecure. I make mistakes, I’m out of control and at times hard to handle. But if you can’t handle me at my worst, then you sure as hell don’t deserve me at my best.” — Marilyn Monroe. (via Brit + Co)

Yikes. we’re having flashbacks from The Ring. Do yourself a favor and avoid looking in the mirror after you’ve had a few drinks ;) (via Brit + Co)

Try this approachable zombie makeup tutorial so you can feel like a total babe while staying true to Halloween’s spooky vibe. (via Brit + Co)

If you’re totally buggin’ over what costume to wear, why not bring out your inner Cher from this classic ’90s film. Or, whatever. (via Brit + Co)

Throw it back to the golden era — when Brit-Brit still reigned as the Princess of Pop. Her signature schoolgirl style circa “Baby, One More Time” is an oldie-but-goodie. (via Brit + Co)

No matter which flavor of La Croix is your BAE, we can all agree that the sparkling water is life. (via Brit + Co)

This babe steals the show in Suicide Squad, so it’s no surprise that she won our hearts too. (via Brit + Co)

Here’s to our girlies on the front lines, still rockin’ out and #RESIST-ing! Show your support for the feminist movement as this iconic lady boss. (via Brit + Co)

Mermaid costumes can go one of two ways on All Hallow’s Eve — decked out and girly or frightfully fabulous. Either way, venture under the sea with this Disney classic. (via Brit + Co)

Go for the gold with this athletic costume that includes warm-up pants, because let’s be real — it would be a little uncomfortable (and cold) to wear a leotard around all night. (via Brit + Co)

Create the silhouette of Jessica’s signature dress by layering a sequined tube top with a sweetheart neckline on top of a maxi skirt. Smokin’! (via Brit + Co)

Prepare to save the shoreline with your amazing jumping skills. Pro tip: If you are planning to walk the streets, throw on your tennis sneakers underneath the tights so it looks like you are barefoot but really aren’t. (via Brit + Co)

David, Josh, Leo, George… the gang’s all here! Pick your fave studs and follow along with the instructions for one hunky rainstorm we’d all like to weather. (via Studio DIY)

Always the sassy one, that Tink. (via Brit + Co)

Get fruity and transform yourself into a watermelon, a pineapple, a strawberry, a lime, or some grapes. (via Brit + Co)

The key to these costumes is bright solid colors and white go-go boots.“You look hot in all that plaster — drink some Fanta, faster, faster!” (via Brit + Co)

Snack food costumes are on fire this year — probs from all of last year’s Netflix-and-chillin’, and this inventive little number is easy to re-create. Choose a pair of butter-yellow footwear and follow along here. (via Studio DIY)

We think you’ll like this funny-girl take on a classic with an amazing Halloween hair hack to boot! (via Brit + Co)

Pay homage to the ultimate Mean Girl by dressing up as her. (via Brit + Co)

You can follow in the footsteps of this trippy hippy with some Woodstock-era flowy pants, Lennon glasses, bell sleeves, and a vest. (via Brit + Co)

Since pool floats are in — and pool noodles are out — why not turn ’em into a bowl of Fruit Loops? Re-purposing props are the green goddess’ way of keeping things fresh every Halloween. (via Studio DIY)

Known for her prowess as a skilled spy, martial artist, and sniper, Black Widow is basically a badass worthy of imitating any year. (via Brit + Co)

We love this getup because it doesn’t take a vampire’s lifespan (AKA eternity) to make. (via Brit + Co)

As a dancer, Bey is THE ultimate performance icon. And as a woman, her strength and career inspire us to be the best and never let haters bring us down. (via Brit + Co)

If you’re not familiar with this type of French wedding cake, it’s made from dozens of tiny cream puffs. So cute *and* delish! (via Studio DIY)

To bring the costume to the next level, pair with accessories such as frilly white socks and a basket to hold your flowers or dog. (via Brit + Co)

This SNL character wears all kinds of outfits, so find the craziest dress at a thrift store to channel your best Dooneese. The key piece is, of course, the tiny hands! (via Brit + Co)

Batgirl here, ready to fight some crime. (via Brit + Co)

So you’ve already tried Cher and Dionne and Thelma and Louise. Next on the list with your BFF: These two sassy women from our fave Netflix hit, Grace and Frankie. (via Brit + Co)

“Give a girl the right pair of shoes and she’ll conquer the world.” — Marilyn Monroe. (via Brit + Co)

Can we get a big round of applause for overalls coming back into style in time for Halloween? (via Brit + Co)

Sisters who ice skate together, stay together. (via Brit + Co)

The best part about this costume is that you can totally wear it again (New Year’s Eve party, done!). So brush off your dancing shoes and Charleston your way to a night of fun. (via Brit + Co)

She’s a true original, and so is her yellow cardigan! Find your favorite patches and buttons to mimic her style. (via Brit + Co)

Grab a glass of rosé, a Grey Goose with lots + lots of lemons, or even a bottle of Skinnygirl Margarita and work it on Halloween night as a quotable, fearless star of Bravo’s series. (via Brit + Co)

She may not have won the election (or did she?!) but HRC is major #girlboss and she makes for an inspiring costume. (via Brit + Co)
a

Even if you don’t have blonde hair, a dark red lip seals the deal — you’re the leader of this squad. (via Brit + Co)

This look really comes down to the makeup and putting the right pieces together to tap into a pretty, sexy, sporty, playful, ethereal unicorn. (via Brit + Co)

Yes, yes, and more yes! To score this look, purchase a long-sleeve pleather zip-up suit. Put on your best pair of bad girl boots and rock your fierceness all night long. (via Brit + Co)

If you’ve yet to see SNL‘s David S. Pumpkins skit that this costume is based on, then TBH, you haven’t really lived. (via Brit + Co)

Say hello to the millennial pink girl squad from the year 3017. These lovely ladies are a thousand years ahead, sporting various shades of this seriously trendy hue. (via Brit + Co)

The tides might be turning. We hear there’s a *storm* coming! (via Brit + Co)

ICYMI, the SNLskit features Kristen Wiig doing one of our all-time favorite roles. First, do your homework (AKA watch the clip) and then have a field day with this kooky character. (via Brit + Co)

Oh nefarious Cersei, how we fear and also admire thee. This Halloween, take on this queen’s character in Game of Thrones season seven as she takes a seat on the iron throne, with all her true darkness shining through. (via Brit + Co)

You’re sure to have a *knockout* Halloween when you dress up as Zoya the Destroya or Liberty Belle. (via Brit + Co)

Wonder Woman‘s Amazonians are tall, strong, beautiful, badass ladies that rule the land of Themyscira, otherwise known as Paradise Island. They formed their own society and cultivated a world where no men are allowed. ‘Nuff said. (via Brit + Co)

“Yes I have had my share of complaints, but on the whole, I’ve been a saint!… to those Poor Unfortunate Souls!” — Ursula from The Little Mermaid (via Brit + Co)

Kristen Wiig does it again (and again, and again) as the girl Gilly in another regular SNLskit. “Her name is Gilly and she’s at it again, causing lots of ruckus like a barnyard hen. She’s always making trouble, her hair is like a bubble. Knock, knock, who’s there? It’s Gilly.” (via Brit + Co)

This really is the perfect disguise for any gal who has the desire to channel her inner warrior. And let’s be real — Rey from Star Wars is a total babe, so if you want to go for the “sexy” Halloween look, this one will win you some whistles. (via Brit + Co)

It’s time to let your inner bird shine in a perfectly pink lewk. (via Brit + Co)

Watch and learn in this SNLskit starring Kristen Wiig, who deserves a Halloween character every single year. Hot chicken! (via Brit + Co)