Every Fashion Person Is Wearing These $145 Boots Again 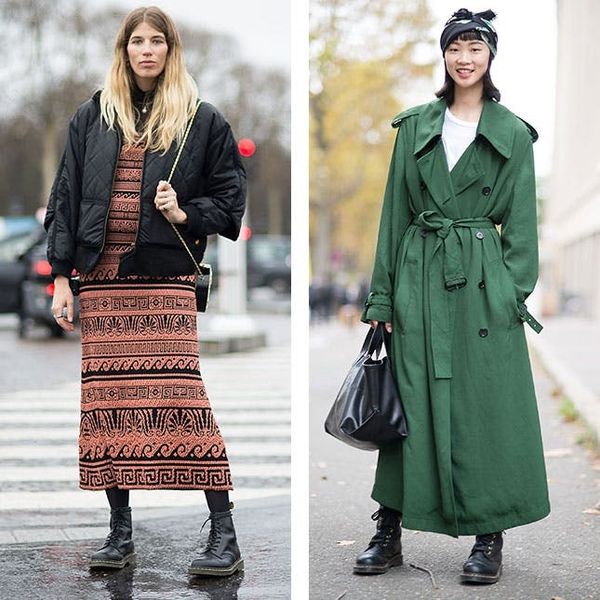 When it comes to the shoe styles of the season, old-school Dr. Martens sets the standard. The brand has been around since 1947 and has been a staple among the grunge and cool crowds for decades. Now, with the rise of the combat boot trend, Docs have infiltrated into the street style set. That’s right, fashion girls everywhere are incorporating the $145 shoes into their ensembles, toughening up their vibes and bringing that downtown edge to whatever they’re wearing. Ahead we’re highlighting seven fresh ways this crew is styling their Dr. Martens. Plus, we're showcasing our favorite silhouettes of the moment if you’re looking to kick it in style this winter.
Green With Envy: Give your sophisticated ensemble (like this one with the green trench, scarf, and top-handle bag) that extra dose of cool. (Photo via Vanni Bassetti/Getty)
The Bomb: While heels would've worked with this outfit as well, the flat combat boots feel more unexpected with the printed dress and bomber jacket. (Photo via Vanni Bassetti/Getty)
Red Hot: You'll live in this ensemble on the weekends with the vibrant knit, skirt, and boots. (Photo via Christian Vierig/Getty)
Suit Up: Dress up your Dr. Martens by wearing them with a sleek suit and coordinating accessories. (Photo via Vanni Bassetti/Getty)
Check Mate: This may just be the outfit we live in all season long with the on-trend plaid coat, leather trousers, crossbody bag, and ubiquitous boots. (Photo via Christian Vierig/Getty)
Toughen Up: Add edge to your favorite pink dress with a moto jacket, studded belt, and those stompers. (Photo via Matthew Sperzel/Getty)
Dress Up: Show off your boots by pairing them with a skirt or unique dress like this street style star is showcasing here. (Photo via Vanni Bassetti/Getty)
Now, shop Dr. Martens: Dr. Martens Work 1460 Boots ($145): Keep it classic.
Dr. Martens 1460 Pascal Velvet Boots ($125): The velvet fabric and ribbon give the boots a playful twist.
Dr. Martens 1460 Virginia Boots ($140): Have too many black boots? Give a brown iteration a whirl!
Dr. Martens 1460 Pascal Glitter Boots ($120): Now here's a simple way to make a statement.
Dr. Martens 1460 Serena Sherpa Boots ($145): You'll stay toasty and cool all winter long.

Bobby Schuessler
Bobby Schuessler is a contributing fashion writer at Brit + Co and has contributed to Who What Wear, Refinery29, Lucky, Glamour, Out, Nordstrom, and Barneys New York. When he's not writing about style and shopping, you can find him catching up on the latest Housewives franchise and sipping his go-to drink, a vodka martini with a splash of cranberry and a twist.
Boots
Trends and Inspo
Boots Shoes Street Style Winter Fashion Winter Style
More From Trends and Inspo